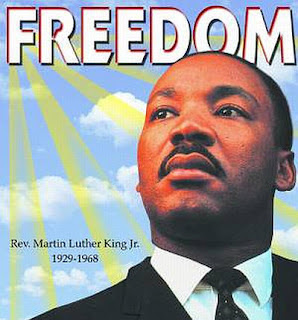 Before I knew who Martin Luther King, Jr. really was, I probably thought he was some sort of medical doctor or healer. I was a year old when he was murdered in Memphis, so my infant mind had no understanding of the times. I had no idea that DC had erupted upon the announcement of his death and Washington's innercity was on fire. When I became old enough to be interested in what my parents and grownups were discussing I heard them talking about someone named Dr. King. It sounded as if they knew him personally because they spoke of him with so much affection. They talked about all the things he had done to help black people and how he was a minister of peace. I heard words in reference to Dr. King that I didn’t understand like equality, justice, discrimination, segregation, integration, and assassination. I heard grownups talk about his Nobel Peace Prize; I didn’t understand what that was either, but I figured that it was something wonderful because it had the word “prize” in it.
My formal education of him began in school as a second grader at Washington Highland Elementary School (now Ferebee-Hope Elementary) in Southeast Washington, D.C. In school the teachers only talked about him around his birthday, but we would honor Dr. King and everyone in the struggle every day before school began. We began our school day with The Pledge of Allegiance and two songs, The Negro National Anthem and We Shall Overcome. By the time I was in the fourth grade I had memorized these songs in there entirety. Back then, the songs and times we talked about around Dr. King's birthday seemed so long ago, but by the time I’d reached the fourth grade Dr. King had only been deceased for eight years. Therefore, his words and memories were still fresh in the minds of the adults who taught me the Dr. King I grew to know. Now, like my parents before me I marvel at his dedication and command of the English language. I don’t know anyone today who can make freedom and equality sound so poetic and sweet. His words were and still are healing. The Bible talks about the power of words; it states, “Pleasant words are a honeycomb, sweet to the soul and healing to the bones” (Proverbs 16:24). In 2008 Dr. King still blesses us with his words (divinely inspired) which inspire us and give us hope. Let us keep his memory alive through grassroots activism and faith in God. Be inspired.
By the way, there are wonderful photos, videos, and information on Dr. Martin Luther King, Jr. and other figures in African American History on Columbia University’s newly launched Amistad Digital Resource. This wonderful website was launched on January 1, 2008 by professor and historian, Manning Marable and it is a great resource on the history of Africans in America. Also, I am proud to mention that my photo of poet, Sonia Sanchez was chosen for their Image Archive. So, I am officially a professional photographer and I don’t care what anyone says. *smile*

Today, I encourage you to visit the site and learn something new about the contributions given by Americans of African descent. Peace~
Sources: Southeast Missouri State University, negrospirtuals.com, homeofheroes.com, Amistad Digital Resource, Nobelprize.org, and The Holy Bible.
Photo sources: Columbia University and Channer.tv
at 1/21/2008 09:44:00 AM

good deal. now i think i am lik you on this, he was one of the greatest lyricist and port of our time and his prose as illuminated in his sermons - brilliant. Thanks for your comment and thats what i call a family outing looking at the movie at home under each other , husband and wife. I just hate im older than u LOL

Thanks for this, brother. There's a lot to discover and to learn from him (and his peers). I was moved last time I was in Atlanta and we visited his resting place, and the church where his dad was pastor. Thanks again.

Hey Stephen *waving*. It was so good to speak to you both, finally!
On my way home I ended up routed via Atlanta and the airport had some amazing things displayed. I had never been to the MLK Center so it was so cool for me to see.

and yay for being a pro & being proud.

An interesting man, thanks for the info

T. Stephens-
Yes, nothing like spending that quality time. :)

Rethabile-
Yes, I took your sister there. She was teary as we walked through.

Mwabi-
It was so good to speak to you too. We got the car fix! Keep in touch.

Kawana-
Thank you and good to see you.

Pwife-
Thanks, but why you gotta go tag somebody! :)

Putz-
A pleasure. Good to see you.