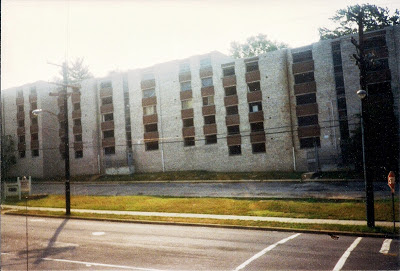 I grew up in the Linda Pollin Memorial Housing Projects.  First of all, I did not know that it was built in memory of Abe Pollin's daughter.  In fact, I didn't even know the name, Abe Pollin.  I was a child, so I thought it was just a name given to the apartments.  At the time, my siblings and I had no idea that we lived in a housing project.  Well, the complex had a swimming pool, and the grounds were well kept. Also, it didn't resemble the well known surrounding projects like Valley Green, Condon Terrace, or Wahler Place. The manager was Ms. Royster who was sort of a no-nonsense type of landlord based on the conversations I heard from grownups.  However, she seemed nice; plus, we all played with and knew her son, John.

Well, although Mr. Pollin passed away back in 2009, I would still like to thank him for building the "LP" as we used to call it.  When I became old enough to learn that it was built by Mr. Pollin to honor his daughter, I sometimes felt bad.  I felt bad because of what Linda Pollin Projects became in the early 80s and throughout the 1990s.  It was part of Washington's pandemic of crime, murder, and drugs.  It also became quite a quandary for the Washington, D.C. police department in trying to apprehend suspects.  There were so many buildings, rooftops, and back hallways that suspects always had a chance to get away.  The LP Memorial Housing Project became a cesspool of debauchery and criminal activities; it was also a favorite subject on the 5 O'clock News. 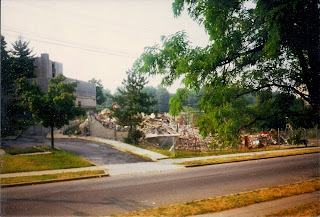 Nevertheless, it was home and I do have some fond memories of the place.  I think that Mr. Pollin's initial gesture was well received, but nothing last forever.  Eventually, the symptoms of poverty and substance abuse would surface and thwart those divine intentions. Well, thanks again Mr. Pollin and please understand that LP was at one time a good place to live, and although it has been torn down and erased from sight, it will never be erased from the memory of so many families who grew up in old LP.  Peace~

Note:  Find out more about Linda Pollin Projects and Abe Pollin by watching the above YouTube video.

What a kind act!

I used to hear about 'the projects' and didn't know what they were about. Then I started reading, but mostly only negative things...yet every now and then, I'd read of someone who's done well, and someone good, who grew up in the projects. You're one of the good, Stephen.

Yes, GG. I thank God. There are so many who fell victim, so I don't take it for granted. It's not a badge of honor, but it is a badge of God's Grace. Thanks, sis.

One of the reasons I like your blog is that it shows the good that can rise out of adversity. Your blog's clean, focused, there's a sense of kindness, wholesomeness, and I learn tons about African-Americans [I got curious because of the old musicians, and of course, my favourite writer, Zora Neale Hurston].

GG, thank you so much! That's actually a great review in just a couple of sentences. Funny how a blog or writing can take on a personality. Maybe it mirrors my own personality to some degree, but ultimately takes on its own-nality. Yes, I have mad love for my culture. My goal is to actually identify and recognize that there is a culture. I also extend that love throughout the Americas. That's why it is so great to keep in touch with friends like you who are authentic and true to their own culture. Love your blog for the same reasons.
In the end, it's so easy to be me because I don't have to think about what to say and how to act. Thanks again, GG! You're a good sister and you are so encouraging. One day, I wish to sit down with you and have a nice beverage. Oh, and some little snack. :)

Mr. Bess,
I am much younger than you I assume. I just wanted to say thank you for writing this post. I was kid growing up in the late 80's in to the 90's. I have copious amounts of memories. Growing up and playing stick ball in Linda Pollin. I wonder did you ever know a Margie Benefield, as a kid? She was my Grandmother. Anyway thanks again.

Always nice to meet someone from LP. If I knew your grandmother, it was probably by face. We typically knew the people who lived in our building or the parents of friends. I graduated HS in 1985, so you are probably younger. Also, I would probably recognize your face or the names of people younger or a little older. Thanks for writing. By the way, what building did you live? We were in 822 and 811.

Although LP was nice it had it's good and bad. I lived in 823 the same building as the Fosters we lost so many of our friends. That neighbor hood made me strong and my one brother and three sisters. My moms was the toughest of us all. Where all adults now and none are dead. I graduated from Ballou night school and completed my IT degree at SEU. Also wanted to say thanks to Rev Collins which we call we called the Bapt. He keep a lot of us out of trouble.

Hello Mr. Bess,
Thanks for posting something on Linda Pollin Memorial Housing project!
A large portion of my childhood was spent living in Linda Pollin. My family lived (1970-1979) in 811. Our building was on the last row that faced the alley to Southern Ave.
Great '70s memories of LP. The Rec center used to show Bruce Lee movies on the weekends during the Summer. The swimming pool really was a major hangout. The parking lot area behind 813 & 823 was where kick ball would be played.
Hopscotch and four corners was played on the concrete walkway in front of buildings 811 & 813. The laundry rooms in the basements of just about every building were open and running. In later years, the laundry rooms were kept locked to deter thieves from getting the coins out of the washer & dryer coin boxes. "Nasty Nelson" was spray painted on some of walls. Nelson was a teen player who infamous for making out with fast teenage girls in those basements.
It really was a safe community during the '70s before Crack took over. Several scenes from Spike Lee's movie, "Crooklyn" is how I remember Linda Pollin during the summer.
Alot of the residents from the time we lived there were working to get out to PG County (Suitland, Marlow Heights, District Hgts. etc) My mother got us a house in Capitol Heights in late '79. I still came back to see my friends during the early '80s. Signs of neglect were just starting to show. In 1997, I was able to see the whole complex fenced in just before it was demolished.

Wow. The back of my building faced Barnaby Rd and the alley to Brandywine Rd. My grandmother, aunts and uncles lived at the top.

I also lived in LP I moved there in 1978 and I have so many good memories as well as bad ones I lost a loved one there it was hard for my family but I miss it and the people we were like family. God bless you all.

Yes, some good and bad memories.

One of the "Marshalls" said...

I am blown away reading these posts. My family lived in Linda Pollin from around 1967 until 1970. We lived in Building 823, apt. 403. Family name is the "Marshalls and we consisted of dad, mom and six girls. Lots of good times and a few bad ones. I remember the lifeguard drowning, the MLK riots, and two creeps who kidnapped my little sister while we were outside playing. Ralph and Stanley were their names. My father and mother found my sister on top of a washing machine. Never knew why they did that but they could have had their heads blown off and my father would have been justified in doing so. He was a police officer.

@Marshall - Wow! That's some story. It makes me wonder just how many different stories exist. Im sure that they are too many to count. I didn't know about the lifeguard. I've never heard that story.

Nasty Nelson! LOL! I love it.

Thanks for sharing that. The infamous alley.

@Marshall - Wow! That's some story. It makes me wonder just how many different stories exist. Im sure that they are too many to count. I didn't know about the lifeguard. I've never heard that story.

Thanks for the post. I lived in LP from the age of two until I went away to college. I am the youngest of 3. We resided in building 833 -- we were kind of isolated from the other buildings -- our building was near the houses at the circle and the Baptist Center. The pool and rec center were to our left as you exited our building. There were two more buildings to our right that concluded the eastern portion of Linda Polin. Great memories of wholesomeness until the mid-to late 80's (just as I was graduating high school). A bit more history of the complex: it was around this time that Abe Pollin relinquished ownership, and ultimately the City too possession of the site. After living in other parts of the City, I became struck at how good we actually had it -- maintenace was timely, the floor plans were spacious, we had a/c, postal service was awesome, neighborhood was clean [of course all of this was until the mid-late 80's]. By high school I learned of the origin of the community, and as I compared it to other surrounding housing communities, I often reflected on how lucky we were to live in a complex with Abe's daughter's namesake -- it meant to me that he would ensure that it was a quality development.

Thank you for sharing your story Anonymous from Bldg 833. I'm certain that there are many more. Stay blessed.

I really miss LP...I grew lived in 825 #302. I can still remember when our apartment doors were color coated. Red doors had one bedroom, green doors had four, yellow had three, and blue had two. I went to Washington Highland Elementary, and Friendship Junior High. I miss that place so much, a lot of good memories and some bad. I lived their until it was demolished, I just wish they were still standing. Their will never be another home like LP. Breaks my heart when I think about it

@NicoleBoyd - It seems that we had similar experiences. These are times and people that I will never forget. Thanks for sharing your story. You probably knew my brother, Brian Bess.