Ghana: The Black Star of Independece in Africa 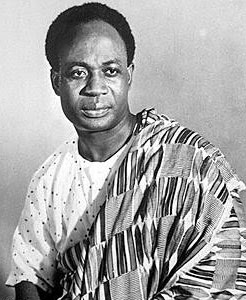 Today marks the 5oth anniversary of Ghana's Independence from British rule. The achievements of Dr. Nkrumah and the support from the people of Ghana remains to be a Black Star in the history of liberation and freedom on the African continent. Ghana is known today as the first African country to gain it's independence. Egypt, Sudan, Tunisia, and Morocco became independent in previous years before Ghana in 1951-1956. They are not considered predominantly "Black" countries by the West so Ghana is considered the first "Black" African nation to achieve it's independence. However, the achievements of all of these African nations created a fervor and determination that spread throughout the continent.

Note: I had previously referred to Ghana as the first "Black" African nation. This term was something that I adopted in my research of this subject. However, as my best friend pointed out to me, the term "Black" African is redundant since Africa is just Africa. Yes, I know there are white, yellow and brown Africans, but I will just say African for the sake of Black Liberation.

Honorable mention: From the 26th to 29th of April 1994, the South African population voted in the first universal suffrage general elections. The African National Congress won the election and Nelson Mandela became the first native South African president to be democratically elected by the "people" on May 9, 1994.
at 3/06/2007 08:07:00 AM

Africa is where my heart is at, actually Africa is my heart...


Thanks for the Love Brother Stephen

50 years, when you think about it, Ghana's just entered middle age. But it's trully just started.

JB-
lol! You weren't even born when Michael Jackson was still a black man. :)Thanks for the love too.

Stunuh-
I'm doing well. Thanks for stopping through!
I can see what you're saying about Ghana. I pray that things continue to just improve on the continent overall.

Bolorunduro-
Thank you. I pray that what you see will come to past. Peace~

Congratulations to Ghana! I have several close friends from Ghana who are celebrating. The boyf's mum also knows the woman who is in charge of orgnanising all of the celebrations in Ghana itself so we've been hearing about the exciting plans.

NML-
That's exciting! I wish that I could be there just to see. Most of the members of my church are Ghanaian. We did a little something this past Sunday in conjunction with Black History.

Thanks for bringing me home. Very informative.

Hey buddy, just wanted you to know I'm still around and like the new look of your blgo.

Wow, I didn't realize that some of those countries are so recently independent.

Thanks for informing us!

I learned alot about him in my African politics & history courses.

Nice piece. I send my thanks and I send you this:

Nevah-
Good to see you. I'm glad to know that you are still in the blogosphere. :)

Dawn-
Information is powerful isn't it.

UB-
I've never taken that course, but I guess that what I'm doing these days is equal to independent study.

Bygbaby-
Thank you brother and hello!

Writer-
Thank you for that info. It's something to remind us that even though these African nations are "Independent" they are still dependent on the West because there is so much debt and poverty. Thanks again.

Hi, Stephen, it's been a long (hard) time, but I'm around again -kind of. I followed the BBC World version of Ghana's anniversary, mixed picture. But I really appreciated your chronology of the list of indendences, clear & simple. So much more so than what went into achieving so many of them. Also, grateful for your appreciation of my Way of the World on Analia's a few days' back. It means a lot to me. Peace to you.

Icarus-
Thank you! I really wanted this piece about Ghana to be well received. I know many Ghanaians in my church and I wanted to represent them well.
Yes, your poem on Analis's site was wonderful! I really enjoyed it. Always a pleasure friend. Peace~ :)

I'm glad you included Zambia....we would have had issues if you didn't :)

Mwabi-
Now how could I forget about my sister? :)