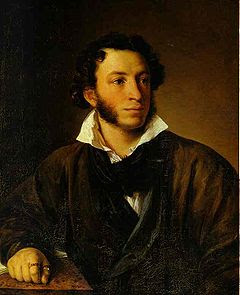 Aleksandr Sergeevich Pushkin was born in Moscow on May 26, 1799. He was first published in the journal The Messenger of Europe in 1814. Aleksandr Pushkin was born in Moscow into a cultured, but poor aristocratic family. On his father's side, he was descended from an ancient noble family, and on his mother's side, he was a great-great-grandson of a black Abyssinian, Gannibal, who served under Peter the Great. Pushkin himself had black hair and dark complexion. Pushkin started writing poetry at an early age, and published his first poem at the age of 14. Pushkin was fatally wounded on February 10, 1837, while defending his wife in a duel.  The Russian Czar buried him at a secret location in the monastery near Mikhailovskoye.  Today, Russia regards Pushkin as the Father of Russian Literature.