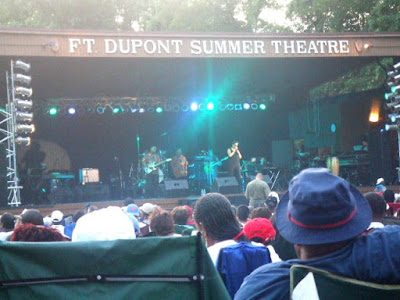 It just doesn't seem like summer without spending at least one summer evening at Fort Dupont Park in Southeast Washington, DC. It's a beauitful amphitheater and park set in historical Fort Dupont Park. The crowd is always nice and the shows are always a treat. The best thing about it besides the huge friendly crowds is that it is FREE! I've been going since I was a boy and the memories just keep builiding. Check out the 2010 line up listed below:

Which reminds me - a singer you must check out, Stephen - Liz Wright.

GG, I am familiar with Liz Wright. She's a very good singer.

It's been a minute since I've commented, Stephen...but I still check you out. And I'm so glad you posted the concert series. Nina's gon' be there...fa sho!

What's happening Nina. Good to see you. I check your website here and there as well. Happy to see that you are doing well and see you at Ft Dupont! :D

That looks like my kind of line-up! Especially Roy Ayers and Kindred Family Soul. Sounds relaxing.

Welcome, a_really_good_deal. Yes, Roy is a favorite at Ft Dupont every summer. The entire concert series is a great time and best of all it's free!

Is it me, or does it seem like the summer concert series are starting later and ending earlier each year.
I mean July 17,2010 is hardly the begining of summer and August 21st is hardly the end. its crazy....

Yes, they are starting later it seems. I remember when they used to do 2 nights on Friday and Saturday. Back then, it started the first weekend in July or the end June I think.

I think that I went to this place once back in the early 1980's. I recall seeing Les McCann play somewhere over across the Anacostia River. I had to take a bus, and I was very scared. It turned out to be a fabulous experience and very safe and peaceful both coming and going. That was back right before Ronald Reagan started tearing apart the federal government and the city's infrastructure.

Don,
there were very nice shows there when I was growing up in the 80s. Back then, there were two shows --Friday and Saturday night. I'm sure you had a very nice time. It's still a nice spot. Thanks for sharing your story.

What a cool event! And it made even cooler for it is free! Events at certain parks are just a nice way of removing all your stresses in life like when I watch rugby (Denver, Colorado) with my brothers and also watch summer concerts in Denver. That's really our one-of-a-kind bonding experience!