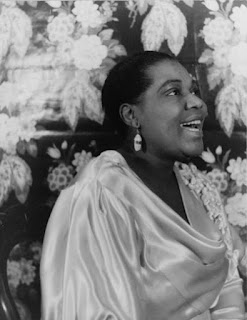 Yes, they called her the Empress of the Blues. She knew the Blues personally and sang them like the evening news. Bessie could curse and caress in the same breath. She was a very quiet and sweet woman, but with her money and feelings you couldn’t mess. She loved hard liquor, hard men, but a woman soft and sweet she’d take. She was an equal opportunity lover and in her lyrics she wouldn’t fake. She’d croon:

“I ain’t no high yella, I’m a deep killer brown.
I ain’t gonna marry, ain’t gonna settle down.
I’m gonna drink good moonshine and rub these browns down,
See that long lonesome road, Lawd you know it’s gonna end,
And I’m a good woman and I can get plenty men…”

Bessie would wail while patrons swooned over the queen that was broader than Broadway and just as bright. She helped to pave the way for many that would come. She was the Empress of the Blues. It was early one Sunday morning on September 26, 1937 as the story goes. Bessie was traveling in Dixie through Clarksdale when her career took a bad turn; a car accident. It was in that crooked letter state. It was where Emmett Till would meet his fate. Yes, Mississippi!

Bessie would also meet her fate that morning. The car that she was in hit a parked panel truck and overturned. There was extensive damage to the Empress. There was internal bleeding and bruises and cuts about her neck and face. The accident nearly severed one of her big, beautiful arms. It was one of the arms that she’d greet with, cut with, fight with, and love with. In the end, Jim Crow wouldn’t let her go to a white hospital so she died on the way to the colored one. The Empress was gone. She passed the baton on to singers like Billie Holiday and Carmen McCrae. She would also influence contemporary artist like Nina Simone, Mahalia Jackson, Janis Joplin and Norah Jones. In 1970, singers Janis Joplin and Juanita Green shared the cost for a proper tomb stone on Bessie’s unmarked grave. It was the only proper thing to do for this Empress who impacted so many lives.

Yes, they called her the Empress of the Blues. She knew the Blues personally and sang them like the evening news.

This poem is featured in Liquid Lunch:  Blues-Inspired poetry:


Note: Bessie Smith was a great woman. One of the things that I love about Bessie is that she looks familiar. There are women in my family that share her statue and complexion. She looks like so many women that I've known or have seen on the streets and subways. God Rest her soul.

Excellent homage. I think I don't know Bessie well enough and should rectify that error.

rethabile-
Thank you, sir. I've provided a link to Bessie and her music. Check it out.

Bessie was the greatest blues musician who ever lived--at least as far as I'm concerned. That huge voice never leaves you once you've heard it.

But, um, Stephen, you might want to check the Wikipedia page again; the old story about Bessie's death was false. She was taken directly to a nearby colored hospital and was still alive when she got there. She died 8 to 10 hours afterward.

mjw-
Yeah, I'm aware that the story was said to be false, but I rolled with it. It certainly wasn't far-fetched for the times.
Besides, it makes for great discussions. :)

I was sampling some of her music on RealPlayer as I read this post. I actually never heard of her, or vaguely hear of her. I'm more familiar with Ma Rainey, who was a musical influence on Bessie Smith. Listening to Bessie kinda reminds me of Billie Holiday. I love Billie, absolutely adore her. Bessie sang the blues as if she was the blues. You're right about that. And so does Billie. I love that whole era of music. I listen to Billie Holiday sing and sometimes I wish I lived during those times just because of the music. Sometimes I wish I was in one of those nightclubs listening to Billie and all the others sing. What an experience that would have been.

And...sometimes, I think I was born in the wrong era. I feel much older than I am and I'm often told that by people.

ubfly-
You know, I think that I heard of Bessie before Ma Rainey. :)I think that I've seen her image all my life. The times were interesting. They would've been difficult to live in with the Jim Crow laws and blatant discrimination, but I would've like to experience the times too.

You're an old soul, huh? That's a good quality in this day and time.

An absolutely lovely tribute to one of my favorite sheroes! Thanks Bess....

profzero-
Hello professor! I hope that all is well in your world. I'm glad that you liked the post. Take care.

barbie-
You're are welcome Ms. Barbie. I became fascinated with this lady while reading her bio. I've adopted her as my new great-grandmother.

bj-
LOL! You might have been one of Bessie's fellas back in the day. Watch out though because if you messed up she'd cut you! :)

Thanks for honoring one of the greats! Bessie's influence on generations of singers is still felt today! This post is gonna have me pulling out my Nina, Mahalia, and Norah! I love to sing (been told I have a voice like an angel) HEE! But all of these legends you mentioned would humble me into silence.

My iPod is packed with Blues music, but not a single Bessie Smith! I'm embarrassed to have not heard of her, but by God, I'm on a Bessie warpath now!

Thanks for telling it. You've educated and enlighthened one more person in this world. Her name lives on.

michelle-
I didn't know that you could carry a tune. :)I'm glad that you liked the tribute. Rule on BBW's!

gnight-
That's fantastic! I've had a couple of people mention that they didn't know Bessie. I was surprised. I thought that everyone knew her. :)
Don't feel bad though. I've known of her for years and I still don't own a cassette or cd. I'm buying one soon. Peace~

Again Stephen - you always make us remember who and where we come from. Thank you - that was beautiful. I enjoy taking time out of my day to learn about a history that we often forget.

Dance-
There you are. :)I'm happy that you can appreciate it. I enjoyed reading about this sister. She was a character. Peace~

Sadly, we don't get much of the Blues here, I've learnt lots thanks to my mother who grew up hearing Nina Simone, Mahalia Jackson and she knows all the stories about blues singers.

And thanks to my brothers too.

There's something I want to ask...the music in the beginning of that movie, The General's Daughter...what kinda music is it? It sounds like music from deep South...is it?

Oh...I'm having plantain for dinnah.

guyana-
I absolutely love Nina and Mahalia! The music made then just had so much soul and conviction. Thanks!

I saw the General's Daughter a few years ago and I don't remember the music. I'm going to have to rent that again. It was a good movie. I want to say that it was what is called Southern Soul. Those are all of the artist from STAX. This includes some Blues artist like, Albert King. Also, The Soul Children, Issac Hayes and The Staple Singers. Anyway, I'm rambling because I don't remember the music. Enjoy your plantain for "dinnah." Peace~ :)

Oh ! Your words are so beautiful, for me they are sounding exactly like a gospel !
How a wonderful hommage to this great woman, Bessie Smith ! She's still alive by your message.

Ah, Stephen, I put a link to your blog today, I had some problems with blogger, though now, it's good for me now, I think.

I saw that you did the same with my blog, that's okay, thank you.
Thank you.

So... Read you often, stephen.

cergie-
I feel so honored that you enjoy my writing. It's what I hope for when I pick up a pen and type it in. :) I linked you when I first saw your photos. I'm happy to be a friend. Thanks!

Thanks for the story. Very sad ending but her memory endures.

nml-
I love the sound of her voice. I just love the Blues. I have to purchase so Bessie soon. As for the story, you're welcome. I'm looking forward to your next story as always. :)

That is seriously f'ed up. Thanks for bringing the history, bruh!

max-
Well, they said that the story of her being turned away from a "white only" hospital is a myth. However, we are talking about 1937 in Mississippi. Hell, look what happened in 1955(E Till) and 1964(civil rights workers found dead).

thank u for introducing a legend..btw was she on par with Billie Holiday?

She was one of the people that Billie would listen to before she made it big. Billie was also a fan of Ma Rainey.

Hi Stephen, Uaridi told me you had written a tribute for Bessie Smith who I absolutely love. I love her amazing voice and her diction was perfect - you can hear each word. I love her the way she sung the blues - I write my most deeply felt poetry while listening to Bessie Smith.

This is great tribute.

mshairi-
Thanks for stopping through. I love Bessie's music too. She had such a powerful voice. I enjoyed writing this tribute because I learned so much about her. I'll have to read some of your poetry. Tell Uaridi hello and welcome anytime. :)

First time here. I bumped into the blues and havent been the same since. Bess bess bess, i only have one song done by her and she is just the best. Wonderful tribute and yes will be back for more. thanks for having me (not that i asked)

gishungwa-
Welcome! Yes, I've seen you posted on some of the other Kenyan blogs. Thanks for stopping in. I love the blues as well. I was in my car this weekend listening to Muddy Waters. I can't get enough. I tried to find Bessie's music this weekend in Barnes & Noble, but they didn't have any in stock. I could've gone elsewhere, but I had a gift certificate for Barnes. :)

I cannot begin to tell you how beautiful this tribute to Aunt Bessie is. Beautiful!!!!!!!!!!!!!

Bronze-
Thank you! I really enjoyed writing this piece. I meant every word. :)