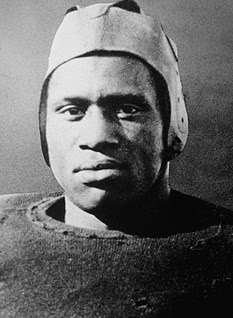 In the 2013 NFL draft, Morphological Confetti posthumously chooses Rutgers University All-American End (Offensive Guard) Paul Leroy Bustill Robeson as it's No. 1 pick!  Robeson stands at 6 ft 3 in (1.91 m), Weight: 219 lb.  He is expected to make a huge impact on the 2013-2014 football seasons.  He is known to be a bone crushing blocker and superb, all around football player.  We [would] expect to hear a great deal from this talented - would be - NFL star!  Give it up for Paul “The Crooner” Robeson!

Note:  His talents include acting and he is known to have a brilliant baritone voice and a heart for the people.    He was also honored as Valedictorian of his graduating class of 1919.  I love this guy! 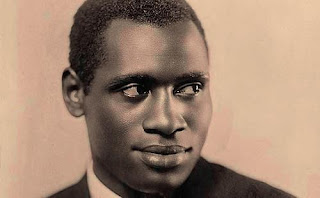 I love, love that second photo, I think it's more *him*, and I'm glad he did well in the arts.

I really. like the second as well. GG, I'm a huge football fan.