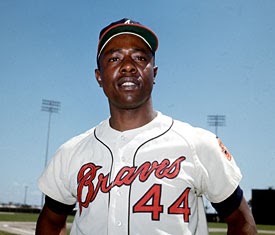 In May of 1975, Hank Aaron surpassed Babe Ruth's RBI (Runs batted in) mark. He finished his career with 755 home runs and over 2200 RBIs—both records still stand today. Aaron was inducted into The Baseball Hall of Fame on August 1, 1982.  Today’s players of baseball have resorted to taking performance enhancement drugs in an effort to catch his record.  SMH.  J In my opinion, Hank is still the man.  Don't hurt 'em Hammer!
Note: 90s rapper MC Hammer earned the name "Hammer" as a young batboy for the Oakland A's because the team owner, Charles Finley, felt he resembled the baseball great, Hank Aaron.
at 5/05/2012 10:48:00 AM