7UP or Coca Cola 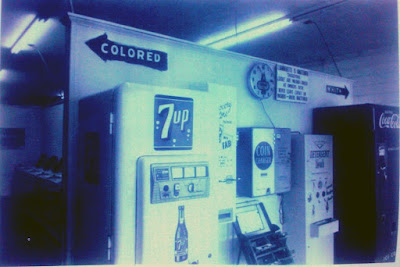 ﻿
I find this photo interesting.  I was wondering why there was 7UP on the "Colored" side and Coca Cola on the "White" side.  Did African Americans have a choice?  I mean, was there a vote whether African Americans favored 7UP during Jim Crow, or maybe Whites prefered Coca Cola?   Well, it's probably nothing, but it just makes me think.  In fact, the whole separte but (un) equal Jim Crow laws of that time occasionally causes me to go into deep thought.   Baffling? I mean, people were just washing clothes.  Peace~
Photo:  1965 Laundromat in Edenton NC
Source:  North Carolina State Archives and The North Carolina Historical Review/Vol LXXVI/Number 1
at 8/08/2011 10:14:00 PM