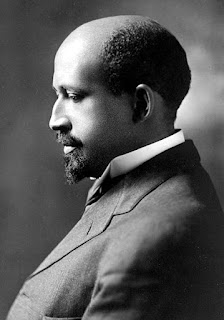 Dr.William Edward Burghardt DuBois, educator, Pan-Africanist, historian, author (the list goes on), was born on this day, February 23, 1868 in Great Barrington, Massachusetts.  In 1895, Du Bois became the first African American to earn a Ph.D. from Harvard University. DuBois spent his life writing and fighting for the rights of African Americans. His views often angered and baffled opponents because DuBois was not willing to wait for the freedom that was due every American despite creed or color.

President Kwame Nkrumah invited Dr.William Edward Burghardt DuBois to Ghana in 1961. Dubois would never set foot back in the United States. In 1963, The US government refused to give Dubois a new U.S. passport. Therefore, Dubois and his wife, Shirley Graham Du Bois, became citizens of Ghana. Dubois' health declined that same year and he died in Accra, Ghana on August 27, 1963; he was 95 years old. Ironically, this was just a day before Civil Rights Activist, Martin Luther King Jr.,  would give his historic "I have A Dream" speech.

Stephen, everytime I visit your site here I learn so much.

Sincere thanks, sending care and love to you, your dear wife and your family (starting to thaw out at lastin D.C.?)

Michelle and a mildy snoring Zebby (my dear rescue cat)

I didn't realize Dubois passed away so recently! Informative as always.