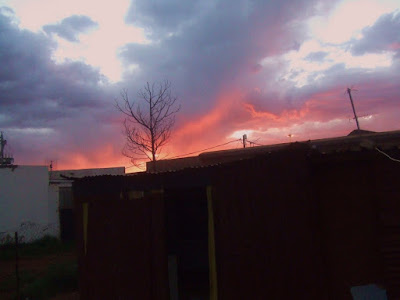 My perception was greatly challenged on my recent trip to South Africa. For instance, when looking around the township of Orange Farm, I saw what many in the United State and the West would call poverty and devastation. However, when I looked closely I saw that it is not as devastated as it appeared. Now, I am not writing this to diminish the great need in Orange Farm and other parts of the South Africa; however, I am writing this to say despite their “situation,” the people of Orange farm are proud, hardworking, and mostly friendly in their demeanor. I did not get a sense of defeat as I lived, walked, and loved among the folk in Orange Farm. They always had plenty of food and smiles to share with everyone. 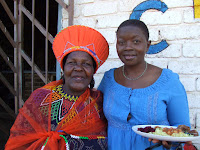 My hope is that the South African government would make paving the roads in Orange Farm and other areas a priority. I often looked down at my shoes as I took my daily stroll around the township. My shoes were always covered in the red dust of the unpaved roads. On the other hand, I saw men and women who lived among that red dust everyday and they had polished, immaculate shoes. I smiled and my forehead crinkled as I wondered how they do it – how can some of the residences live without proper building materials, lack of plumbing, unpaved roads, and other amenities that some of their countrymen are used to less than an hour away? Well, my conclusion is that it is all by the grace of God. As the Bible states, His grace is sufficient. 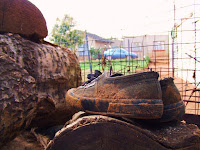 So, while there is a great need in Orange Farm, the people are survivors. They have the strength and determination that many of us lack. Yes, there are some who are very poor. There are, perhaps, some who are unfriendly and completely devastated in their condition; however, they are in the minority. The rest, I feel, are somewhat “beaten but not bowed.” In the end, my perception turned out to be nothing I’ve ever seen, and all I’ve never imagined. I Thank God. Peace~

I read your account of your recent stay in Orange Farm with great interest and admiration. The kinship that you have established with the place and its habitants is admirable and priceless. Many an attempt was made by non-South Africans in articulating the plight of our people back home, but your observations should be well noted, and your comment and plea be heeded.

I bet we'll find a way to rid your shoes of persistent dust that obliterated their shine! *smile*

May I add that all the poverty you witnessed is not there accidentally. And it amazing that the people harbour no animosity!

it's been a while since I stopped by here...love what you posted

Yes, in such places the homes may look poor and shabby on the outside, but inside they are often neat and cheerful. I noticed the same thing in Bulgaria -- high-rise buildings that lloked like slums, neglected, yet go inside the flats and it is quite different -- homely places, hospitable people.

Thanks, Henri. I did my best to convey my experience there without offending South Africans who have always lived the experience. There are some parallels growing up here in America, but the experience is very different in many ways. Khotso~

@Cathy - Thanks, sister. Always a pleasure.

@Steve Hayes- Thanks for stopping in. Your comment helps us to realize that we are sometimes more alike than we know or realize. Peace and Blessings to you.