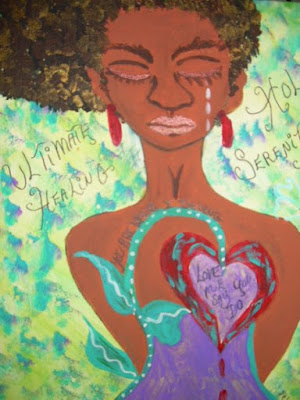 We made the front page? Wait. We always make the front page when it comes to crime, mayhem, and death. Conservative:  Oh yeah buddy…what about Obama? Response:  First of all, his proper title is President Obama, and being a president of African descent in America is hazardous in itself. You really don’t understand do you? Black and Brown people most often make the headlines as long as they are spitting at the cameras while being arrested, getting a beat down by _ _PD, raising hell in a court of law, or just stretched out on the street, covered in white sheets in New Orleans or Haiti. In Haiti, even black babies make headlines covered in [little] white sheets or whatever they can find.

The media seems fascinated with black and brown images of death. They call it primetime, sensational, and news worthy. It’s gritty – the image of wretched, poverty stricken black and brown bodies stretched across your wide screen televisions in HD. Yes, it’s reality, but where is the humanity? Where’s the humanity? Let me ask you this question CNN, MSNBC, FOX, etc. What if your mother, sister, brother, or child were lying dead on the streets of your city or town? Picture this – what if the photographer from the Associated Press (AP) didn’t care. He’s shooting for an award winning photograph, while flashes from his camera leave you blind with tears of rage? What if it was your baby lying dead on a splintered, wooden bench covered with only the business section of yesterday’s paper? Would you be outraged?  Would you? Tears.

...Otherwise, the global support and relief effort is fantastic. I don't know if we would have seen the same support 10 years ago. The growing black and brown imigrant population in the US has a lot to do with the response. That's just my own theory.

Yes, dear Stephen. Hope they get the earth moving "gear" the bulldozers etc... aoff so then the trucks of aid can get to where it is so,so needed.

Complete coincidence - last night TVNZ replayed a 2 hour drama/doco of what would happen if an 8 on the richter scale earthquake happened here in Wellington. HAd been rescheduled as was first due to replay a couple of months ago only Samoa had a major earthquake and the southern coast was devastated by the resulting Tsunami.

Here in the western world (well, here in NZ anyway) we are urged to be prepared for weather and/or geological based disaster. Here, even now living on invalids benefit, i am able to prepare and have stockpiles of necessities. The people of Haiti didn't have this, or homes that were in anyway stable.

Outraged, yes, and will stay that way for a major while, however please - if you can, donate some money (is far more use to the aid agencies than actual stuff). Even a dollar, or a quarter or a dime helps.

Coo - major apology, dear Stephen, for using your blog for my help cry for Haiti. Confess I dod feel I will reach way further than over here where agencies are in full cry/flood.

And after all this rambling, I send super love and care to yo and yourfamily, dear Stephen - your writing helps me stay anchored to the wide human race.

And one day I will learn to proof read before publishing!

This is very interesting,well said and worthy. Thanks for sharing your views.