On May 28, 1830, the United States put forth legislation that would lead to the “Trail of Tears” in 1838. U.S. President Andrew “Stonewall” Jackson signed The Indian Removal Act of 1830, which eventually forced many Native American tribes such as the Cherokee, Creek, Chickasaw, Choctaw, and Seminole Indian tribes off their land in the southeastern United States. According information on PBS.org:

"By 1837, the Jackson administration had removed 46,000 Native American people from their land east of the Mississippi." 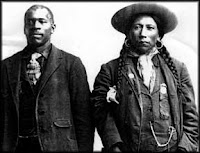 Interesting Finding: The African American Registry (aaregistry.com) says that “It is estimated that one-third of the members of these tribes involved in this removal and the ensuing trek to Oklahoma were of African descent.”

Note from Stephen: Listen, I know that many Afrian Americans feel that they are part Cherokee, Blackfoot, etc. and some may in fact be part Native American. However, the predominant truth is that most of us are genetically connected to Sub-Saharan West African. I'm saying this because I rarely hear anyone bragging about their African ancestry. So, it's cool to pay homage to that distant relative who roamed the great plains, but also don't forget those ancestors who hailed from Nigeria, Ghana, Senegal, etc. As a matter of fact, kiss an African today or just look in the mirror and kiss yourself. Peace~

A beautiful reminder, my friend.
; )

Thank you. Yes, definitely worth reminding.