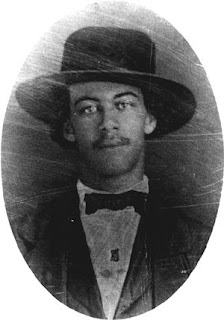 
This day, October 16, marks the 149th anniversary of the John's Brown raid on Harper’s Ferry, West Virginia in 1859. It was an attempt to capture the arsenal and seize the weapons by John brown and 21 men: 5 blacks, including Dangerfield Newby, who hoped to rescue his enslaved wife, and 16 whites, two of whom were Brown's sons. This raid would strike a blow against the terrible system of Slavery that kept millions of people of African descent in bondage. Abolisionist and African American leader, Frederick Douglass told Brown that it would be a “grave mistake.” John Brown knew that this daring feat was nearly impossible, but he was willing to try, and most of all he was willing to die.

For the raid, Brown trained and brought with him five young African Americans, who were also willing and ready to die. One of them was a 24-year-old man named Lewis Sheridan Leary [pictured above]. Lewis was a harness maker from Fayetteville, North Carolina. He was an ex-slave descended from African, Irish, and Native American heritage. He was a strong young man – a recent father and husband – a revolutionary. During the raid on Harper’s Ferry, Leary was mortally wounded as he tried to escape down the Shenandoah Valley. He reportedly told his capturers, "I'm ready to die." He survived for a eight hours before succumbing to his injuries. He died just 4 days before his 25th birthday. In the end, I think that all of John Brown’s men knew that this daring feat was nearly impossible, but they were all willing to try, and most of all, 22 men were willing to die for the freedom of us all. God rest their souls. Peace~

Yes, may God rest their souls. We owe John Brown and those who died with him a debt. Thanks for reminding us.

Wow, this is deep, thanks for sharing this with us

Fitzgerald-
So true. I wonder why there was never a film made about the life of John Brown? Wait...I know why. :)

Cathy-
You're welcome. Thanks for stopping in and letting me know that you are back. Good to see you.

i always love your history lessons!

Love the stuff you deal with on this blog. Someone needs to remind us of the heroism and commitment that burned in the hearts and souls of those forerunners who sacrificed their lives for the freedoms we so often take for granted today.

Might they be called terrorists today. Thank you for the history lesson.

Pwife-
My pleasure. Good to see you.

Marvin-
Thank you. I learn as I go.

Lyre-
I know they would be considered "domestic" terrorist today. Well, John Brown would be domestic and the slaves would be terrorist refugees. :)

Rough times and feel sorry for his widow and child being left behind. Harper's Ferry is a beautiful town and what a sight from Jefferson Rock, looking town into the confluence of rivers.

thanks for continuing to remind us of our history. we sometimes focus on the future forgetting the importance of the past