Last night, I had the pleasure of seeing my daughter, Thakabasadi Sato perform at the Kennedy Center's Millennium Stage. She's a dancer with Lesole's Dance Project. Lesole Maine (pronounced: Mah ee nay) is a very talented dancer and performer from South Africa. He has assembled a terrific group of young dancers here in the states and they were definite crowd pleasers at the Kennedy Center for Performing Arts last evening. The performance was more like a story book in dance. They performed traditional South African dance which spoke honor to the ancestors. The story continued as they transported us in time to the turmoil of the Apartheid system. This included a backdrop of film footage accompanied with protest chants and high stomping defiance against the injustice. They ended it with the fancy footwork of Hip-Hop and the influences it has had on South African music and youth (see Kwaito). You know I acted a fool as all fathers will when they see their child on stage. Yes, I've seen her on stage before, but this was the Kennedy Center! It meant a lot to her. I wasn't too bad though. My wife only slapped me upside the head once because I yelled out something in Sesotho when they hit one of their moves. It was great! We were not allowed to take any pictures of the performance, but here are a few that we took afterwards. 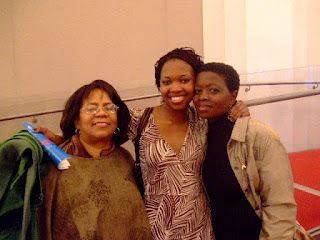 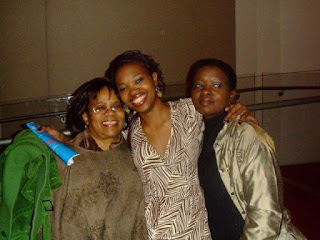 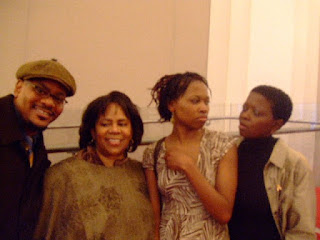 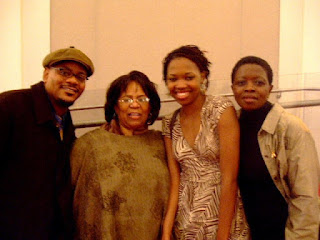 There was tremendous support from family and friends. We all had a great time just talking and laughing after the performance. In the end, Ke isa masapo ho beng (translation: I'm taking the bones back to the owners). Lesole taught me that! Yes, I was sleepy and it was time for bed. Peace~

Stephen, you are so blessed with such a beautiful group of women to call your family! I bet your daughter was not embarassed by you, even though you got a little out of hand. That sounds like a very special evening! Thank you for sharing, we all need to hear about these good things in life, especially this week. Blessing to you and your family! And big hugs all around!

I HAD NO IDEA that your daughter DANCED!!! You know I want to see her perform. Did they do any Gumboot dances? How exciting. The Kennedy Center - no less - you must be SO proud. Tell her I said - Congrats. Beautiful pics of the fam. Man - I get excited when there is talk of DANCE!!!

Faith-
Thank you. I feel blessed every day. I'm happy that it can send a little cheer your way after all that has happened here in Va. Peace and have a good weekend. :)

Dance-
Yes, they did some Gumboot. As a matter of fact, that is their signature dance. You would've enjoyed it. We need to see you do your thing too. :) Thanks.

I agree, your family is beautiful from the inside out. And yes, you look like your Mom! I feel happy through you and your family, the spirit shines. Peace be with you and yours.

Isn't it strange/wonderful to see our children perform out in the world? It's a beautiful thing.
Congratulations!

Thank you for being honest and saying that my poem was bad. I hear that a lot.

Getzapped-
That's very nice of you to say. Thank you!

Geoffrey-
Yes, it truly is. I was up in the front row. I was making such a ruckus at times that people turned around. :)Thanks brother Geoffrey.

Alex-
lol! Yeah right. As RunDmc once said, That poem was not "bad meaning bad but badd meaning" good." :)
Otherwise, I thank you for your kind words. I am blessed and I pray to stay blessed. I pray the same for you. Peace~

Your family are lovely and it's great to see your gorgeous wife! I hadn't realised that you had a daughter and I must say she is stunning!

What a beautiful family you have.

NML-
Thank you so much! Yes, she is a stunning pain. :) No, only sometimes. They are gorgeous. Thank you.

OMG! so I wasn't the only one who revealed something new this week :) Your daughter is beautiful, wow, beautiful family showing support. Thanks for sharing those pics, you must be very proud. You don't even look like a dad, you're a young, hip and cool dad :)

Cathy-
LOL! Thanks. Check on me in 10 years. I thought that you all knew about my daughter. I have her picture up on the Morphological Confetti homepage.

Wow is right! I didn't know you had a daughter, let alone one old enough to be dancing on her own! You have a beautiful family. Stay blessed.

Fizzio-
Thank you! Many blessings your way as well. :)

What a nice familly I did not remember your wife has short hair. Your mother seems so young and your daughter is a pretty young lady...
I'm well, Stephen, thank you. It's nor easy for me to do all what I want to do though, It seems that I'm always running behind a train to catch it.
Have a good week end, Stephen. You and all your lovely familly

HAHA. I felt the same way this week - "Wow, Stephen and Cathy have Children? This must be reveal something new about yourself week."

Stephen Bess you have a wonderful, lovely, and talented family. Congrats to your beautiful daughter, and a very proud mom and dad.

is it unusual for the entire family to be so in tuned with the arts? I believe your daughter has being greatly influenced by you and your wife since young.

Marthyan-
Very much so. :)Thank you and welcome.

Cergie-
Yes, I'm a proud papa. Have a great weekend and always a pleasure.

Blkfeline-
Yes, we're a family whose brain is functioning completely on the right side. The problem is that some of us are terrible at math. :)

Beautiful people. 'Mè 'Ma-Bess looks like Moshoeshoe the first's wife, as i would have imagined her. A real Mosotho, with the right bone structure and natural beauty. Marvellous! This post made my day/

Rethabile-
I will pass this msg on to mother. She's trying to learn sesotho as well. Your comment will make her blush. She loves the culture. Also, she is a good mother and she loves her daughter, grandaughter and family. Peace~

Wow! You have such a beautiful family, Stephen! But Momma looks more like she could be your sister! Wow, she looks so youthful! I would love to do African dancing.

I'd never in a million years think that you and your wife have such a beautiful, grown-up daughter. When you said 'daughter' I pictured a 6 year old.

As a dad you're supposed to behave loud and proud!

How I wish I could see performances like that, we have so few, and they're usually the same ol, same ol.

GG-
Yes, we have a grown woman of almost 20. She's becoming a woman before my eyes. It's great! Come on over to DC. We'll take you to some events. :)

By the way, last night I saw a documentary on the music of St. Africa, how the events in St. Africa influenced the music. I swear one of the fellas telling the story looked like you, hat and all...except he was St. African.

There was Hugh Masakela, Miriam Makeha, and many others. It was a GREAT programme.

I'm reading your blues 'series', a bit at at time, just relaxing.

GG-
Yes she's becoming a grown lady. You sound like my wife. She tells me that I look like a South African man all the time. :)I'm sorry I missed that program. It sounds interesting and right up my alley. Thanks for checking out the Women and the Blues series. I'm enjoying the research. Let us know if you ever make it to Washington. We'll show you the town. Peace~

Mental health. This has been on my heart for many years concerning Americans in general, but it is especially crucial in the African ...