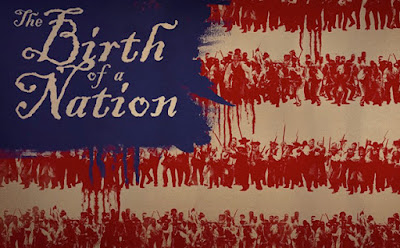 For a long time I have kept silent, I have been quiet and held myself back. But now, like a woman in childbirth, I cry out, I gasp and pant. I will lay waste the mountains and hills and dry up all their vegetation; I will turn rivers into islands and dry up the pools. I will lead the blind by ways they have not known, along unfamiliar paths I will guide them; I will turn the darkness into light before them and make the rough places smooth…” Isaiah 42:14-16

After teaching my afternoon class today, I went to Germantown, Maryland to see the film, The Birth of a Nation. The film was co-written and directed by starring actor, Mr. Nate Parker. I was excited for a chance to see this film that I have been waiting for in anticipation for many years. In recent years, I imagined or hoped that Spike Lee would take on the project or maybe John Singleton. Besides, I thought that Singleton did a great job on Rosewood, which was also a period film. However, one of my favorite actors, Nate Parker, took on this historically riveting and controversial narrative and I was not disappointed.

Before I arrived at the theater, I read a few of the reviews from “reputable” media sources. Many of them trashed the film. They spoke of the numerous historical inaccuracies of the film and declared it a failure. They even revealed pertinent scene information that I considered a definite spoiler alert. However, I did not go to see this film in search of historical accuracy. Sure, I initially looked for correlations in my understanding of the narrative, but when I saw what Parker was trying to convey, I understood. It's art. I know the history of Nat Turner. I have been aware of his history for as long as I can remember; however, I saw the director’s interpretation of the that history as a sort of creative nonfiction.

For instance, the narrative of the insurrection and battles against armed militia as they pressed towards Jerusalem (present-day Courtland, Virginia) was historically inaccurate. There was even a change in the narrative of how Nat Turner was eventually caught, but I thought, ‘what does it matter?’ He was caught. He was captured, dismembered, executed, and mutilated beyond imagination. So, yes, I noticed the differences in the film, but that didn’t bother me. 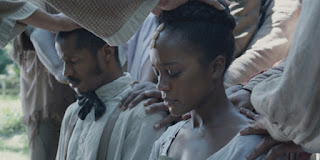 I was more concerned by how hurried the film seemed in its storytelling. For instance, I wanted to see more of Nat and Cherry’s (Aja Naomi King) relationship as husband and wife. I wanted to see Nat as a teenager and his development into a young preacher. There seemed to be a rush to get to the insurrection, which, by the way, I did not find particularly gory as it was described by other reviewers. In fact, the director seemed to spare us much of the gore that happened in the true, historical narrative.

Also, there is somewhat of an emphasis on religion and African heritage. There are many scenes that seem to honor the African ancestors as well as their language and traditions. For instance, the opening scene depicts a sort of ritual involving the young Nat Turner (Tony Espinosa), and the circle of participants were speaking in an African language. Also, Nat’s character mentions his grandparent who was brought directly from Africa. Along with the Great God Almighty, Africa becomes Nat Turner’s source of strength, identity, and perseverance.

Now go and smite Amalek, and utterly destroy all that they have, and spare them not; but slay both man and woman, infant and suckling, ox and sheep, camel and ass. 1 Samuel 15:3

As for religion, the director does not criticize the Bible or Christianity. Rather, he points out the use of the Bible as a justification for slavery. He also uses Nat Turner to dismantle and tear apart the misinterpretations and untruths associated with the Bible, servitude, and the dutiful slave.

Well, should you go and see the film? Yes, I urge everyone to see The Birth of Nation. Perhaps you will see something different, but I predict that it will, at least, cause you to think. Also, we cannot deny the timeliness of the film considering what is going on here in the United States with the killing of young black men. God help us – God help us all. Meanwhile, rise! Rise! Rise!