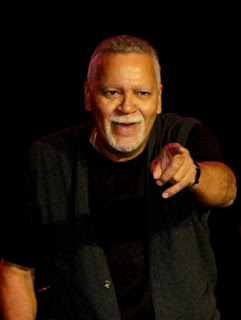 In the early 90s, I was a Jazz disc jockey as a student at Savannah State University. I particpated in work study program at the campus radio station, WHCJ 90.3 FM. It was fun and I created a bit of fan base in the four years that I worked there. It was also my first time being exposed to what WHCJ station manager, Theron "Ike" Carter, called "real Jazz" music. I knew little - very little - about Jazz outside of Louis Armstrong, Duke Ellington, and Adult contemporary music that I thought was Jazz.

One of the groups that I learned about while working at WHCJ was The Jazz Crusaders featuring Joe Sample, Wilton Felder, and Larry Carlton to name a few. I became a huge fan of their music, and I followed Joe Sample's work and would often play it on my radio show, "An Afternoon Rendezvous."

Well, after graduating from college, I continued to follow Jazz music as well as the music of Joe Sample. Fast forwarding to the late 90s, I had the opportunity to sit in on a taping of the Black Entertainment (BET) show, BET on Jazz. In the taping, I was excited to see that they were going to feature  the music of Mr. Joe Sample. I was so excited; I watched him as he spoke to different people involved with the production and I carefully watched him prepare before everything started. R&B legend, Mr. Lou Rawls, was set to host the show. Soon, he noticed that I was looking at him. Once he looked my way, I immediately smiled and said hello by waving. I think that I expressed it with such vigor and familiarity that he thought that we knew each other. His eyes squinted as he seemed to search his memory for the time that we supposedly met. I noticed and I assured him that we have never met. "I just wanted to say hello," I told him. He smiled, gave me a friendly nod, and continued preparing for the taping. I will never forget that moment.

Well, rest well Mr. Sample and thank you for your sincere kindness and your wonderful music.