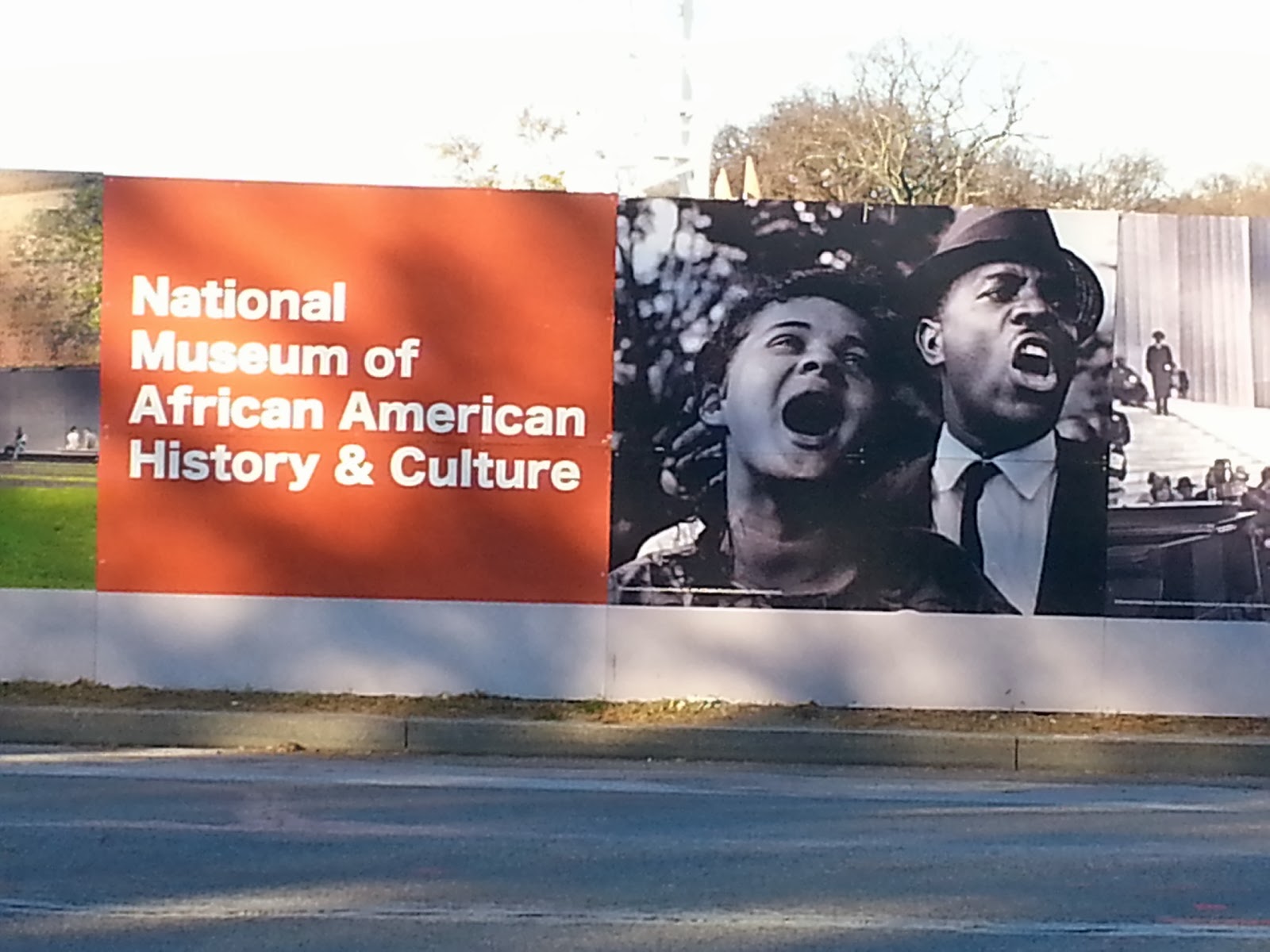 Washington (MC) -- The Smithsonian erected a wall of historic photos as an announcement for the forthcoming National Museum of African American History and Culture (2015).  The iconic image of young Jacquelyn Bond is among those located at 14th and R St. NW.  Here she is flanked by Goldie Frinks, aide to Dr. Martin Luther King.

In honor of Black History Month, there are those within Montgomery County Public Schools that made a difference in the lives of those once considered inferior, well before Affirmative Action was even considered.
Generations of willful women compounded within the heart, mind and spirit of one.  Her name is Jacquelyn Ann Bond-Shropshire, MA., MBA..   She was an adept business teacher within Montgomery County Public Schools for thirty eight years.  However, prior to her role as an educator, she was called to serve as a freedom fighter within her community in North Carolina, where by most accounts the civil rights movement began.

Jacquelyn was born on April 15, 1948.  Her parents by all standards were revolutionary.  Her father Styron C. Bond, Sr. was a retired buffalo soldier who had served in World War II as a Sergeant in the 307 infantry of the Army.  He was also the town’s first black entrepreneur-owning a grocery store, a barbershop, a beauty salon and a bail bondsman business.  Bond’s mother was a school teacher that hailed from a community of free Black and Native Americans.  Annie James Bond was from a family that had never know the indignations of slavery and servitude experienced by most other black families of the time.  Unfortunately, at that time the only work available for well educated women of color were in smaller towns.  These tiny towns were often far from where they lived and paid very prejudicial salaries.  Smaller towns required long stints away from the family.  In her case, Annie had to travel well over one hundred miles to get to her place of employment.  She would often come home once a month to visit family and friends only to leave again on Sunday evenings.

Jacquelyn is the middle child born between the birth of her two brothers Styron Curtis Bond, Jr. (Mickey) and Clinton Bond.  Peggy Jean, was born eight years after Jacquelyn.
In the seventh grade, “Jackie” aspired to become a teacher.  Having had some of the best influences during elementary and high school, astute English teachers relegated to teaching in segregated schools would motivate the academic pursuit of English as a minor-during Miss Bond’s undergraduate experience at North Carolina Central University.  In honor of her father, who passed away when she was sixteen, the determined young woman majored in business and received her first Master’s degree from her undergraduate alma mater, in 1972.

However prior to the age of sixteen Jackie had already lived the life of another type of soldier.  A Freedom Fighter!!  At fifteen, Jackie Bond would be the youngest civil rights leader in her hometown of Williamston, NC.  The newspaper headlines, books and radio announcements kept the young girl enthralled with the current events that were impacting all people.  She had determined at a very early age that she had to make a difference in one way or another.  Being served food from the backdoors and small windows of restaurants, being denied basic customer service and human courtesy , being denied access to common necessities and resources merely because of skin color, was unjust.  The indignation needed to cease within her lifetime.  All she knew was that she could not allow her unborn children to endure what she and other ‘different’ people had gone through.
Several instances occurred that served as the catalyst that would determine Jackie’s efforts to end discrimination in North Carolina particularly, but nationally as well.
The free thinking young girl was almost killed when the rambunctious sheriff decided to use electrified cattle prongs (used to shock livestock while herding) to make the force of demonstrators move away from the train tracks.  The electrified stick made contact with Jackie’s stomach.  The scar is still visible nearly fifty years later.

On another occasion, Jackie vividly recalls having her parents sleeping in the car with her while on a long road trip from N.C. to Florida.  Blacks were not allowed to sleep in hotels.  There were very few hotels owned and operated by Black people along any main roads within the South.  Many entrepreneurs of color were fearful that their businesses would be burned or worse-they themselves would be targeted for lynching.  Independent black people were considered a threat, and were often killed as a result.
Jackie and her brothers had also grown up hearing the horrific tale of how her great grandfather as well as their grandfather had lost their lives, at the hands of violent mobs for merely speaking to white women.  One of the two ancestors literally lost his head for being kind to someone who was ‘off limits’.  The event sent a clear message to all of the townspeople that Black men were not to court white women, yet white men frequently TOOK whatever they wanted from any black man or woman.
Jackie was also subject to arrest on more than one occasion.  On one such run-in, the teenager was incarcerated and tried for using a “White Only” Laundromat.  When brought before the court, she was asked by the judge, “Didn’t you know that you were going into a WHITE ONLY establishment?”, Jackie responded with savvy, “No sir, I thought that White Only meant White CLOTHES only”! Her father just shook his head and left the courtroom stating “She doesn’t need my help.  She can handle herself”.  Having been forced to stay in a jail cell prior to her hearing Jackie heard news of an upcoming March on Washington, where the honorable Reverend Dr. Martin Luther King, Jr. was going to speak.  She determined that she was going to be present for the event.  Somehow the young freedom fighter encouraged her father to sponsor one of the three charter buses that would head to Washington, D.C. for the monumental occasion.  Jackie had just turned fifteen and was not allowed to go to Washington, D.C., alone.  Sister Ella Mae Ormond (the community Auntie) agreed to chaperone the group so that any of the young adults could also attend.  Jackie Bond had to be there in the midst.  Among all other individuals who were poised to do what could be done nonviolently to effectuate equality within this country.

As a result of the social deviance exacted by clusters of determined sacrificial young people-the fifties and sixties yielded many liberties including desegregated schools.  These luxuries are often taken for granted today.  These passionate youth changed the minds and hearts of American who had forgotten that the Constitution applied to ALL Americans regardless of the circumstances that brought them to the land confiscated from the Native Americans.  To ensure that the long hard fought battle contributed to the Civil Rights victory, Jacquelyn began teaching in the school system that supported the area that she vowed to return and live while visiting the District of Columbia during the 1963 March on Washington.  She taught two years in Chapel Hill, N.C. and her home in Martin County.  From there she taught two years in Connecticut suburbia.  Bond-Shropshire would later tell her children that “SILVER SPRING just sounded magical”, an immediate draw to the area for a hopeful teen.  She began teaching in Montgomery County Public Schools in 1974.  She ended her forty two year career in the Spring of 2012.  Mrs. Shropshire (as she was referred to during her career), taught accounting and various business classes during her thirty two years at Montgomery Blair High School.  The veteran teacher completed the last six years of her career at Einstein Senior High School.


She is the proud mother of a daughter Deltonia and a son Dee Shropshire.  Shropshire is also the grandmother of two vivacious granddaughters Blair Logan and Brooke London Shropshire.  Jackie continues her civil rights advocacy through public speaking and community service.  She still battles in the courtroom when the occasion calls for it.