Anchors Away my Cabin Boy 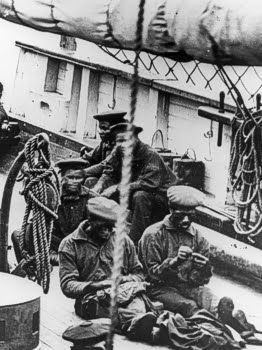 I can appreciate this history as a US Navy veteran:  On September 25, 1861, the Secretary of the Navy, Gideon Welles, accepted enslaved Africans into the Union Navy.  However, they were not allowed to exceed the rank of "boy" and they also received less wages, which included daily rations and a monthly pay of $10.  White Union sailors received rations and a monthly pay of $13.  By the end of the Civil War, African Americans received the rank of non-commissioned officers or petty officers; however, there were no African American commissioned officers during the Civil War.  The African American sailor would not see a person of color in an officer's uniform until the Second World War with the Golden Thirteen. Oh Navy!