MC Spotlight: Kings of the Evening 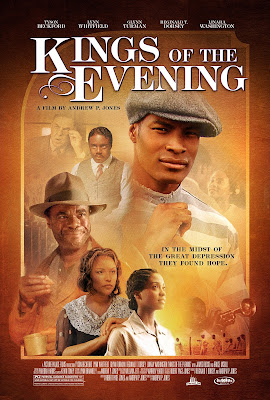 In a time where many African Americans depictions in film are centered on comedy and sex, I found Kings of the Evening (2008) to be aesthetically and immaculately refreshing. It was a simple story with familiar but somewhat complicated characters.

Kings of the Evening is set during the Great Depression in the United States. The film is about Homer Hobbs (Tyson Beckford), a young man who is released from prison just to find that his mother (seemingly his only family) has left town. Suddenly, he has to fend for himself and ends up in a boarding house filled with characters that help make Kings of the Evening a success. Each character has a story which led them to the boarding house, and each found out why they were all led there together.

Its principled approach to filmmaking was like something borrowed from the past. The writers and directors of this film didn’t seem to concentrate on industry standards that are riddled with often offensive scenes and dialogue. Instead, they concentrated on the frailty of human beings, and how it is so important to encourage one another through a kind act or word. It was a descent movie for the entire family. The film has a star-studded cast including Glynn Turman, Lynn Whitfield, Bruce McGill, Steven Williams, and Reginald Dorsey.

The film also featured television and stage actors Lou Myers and the upcoming Ms. Linara Washington, who plays the young, troubled factory worker, “Lucy Waters.” I was especially enamored by the Sunday social that featured and picked the “King of the Evening.” I’m sure audiences will enjoy every minute.

Overall, this film may go down as a holiday favorite. I hope to see more positive depictions of Africans in America.  Besides, as the character Mr. Gamba (Steven Williams) states: “When a man can stand up to the mirror, he can stand up for life.”  In the end, I was delighted to find that there were both kings and queens who stood up to mirror.  Yes, there was a teardrop.  Rent or buy today.