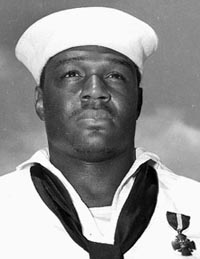 On December 7, 1941 SN Doris "Dorie" Miller, a messman on the USS West Virginia (BB-48), downs three Japanese planes in the attack of Pearl Harbor.   He was the first African American to be awarded the Navy Cross, the third highest honor awarded by the U.S. Navy of the time.  He was also promoted to rank of E-4 or 3rd Class petty officer.  On November 24, 1943, Dorie Miller was killed after a torpedo from a Japanese submarine struck the USS Liscome Bay (CVE-56).  Miller was a 3rd Class cook on that ship.  Miller's parents were on informed of his death on December 7, 1943, which is two before he shot down enemy planes in Pearl Harbor.  Read more interesting facts about Dorie Miller...