Marquette Frye and the Watts Riots of 1965 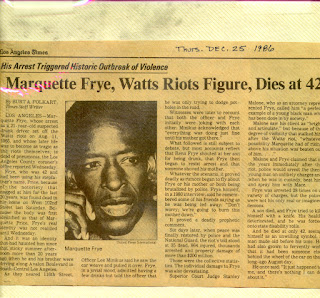 Over the past week, one cannot look at the news media without hearing something about the riots in London.  It's only a matter of time before the people will become frustrated after being mistreated for so long.  No, I don't live in London, but I believe the testimonies of the blacks who live there.  As a conscious African American [absent the bitterness], it sounds all too familiar.  It seems that there needs to be only three elements in place for a riot to ensue:  law enforcement, the disenfranchised of the population, and a crowd.  I'll repeat -- there are three elements -- It's law enforcement [gunpowder], disenfranchised  [fuse], and the crowd [fire].  There are, of course, preconditions that create these bombs that only await the fire.  On August 11, 1965 the elements were in place and fuse was lit!

In the 1965 Watts Riots, the disenfranchised man's name was Mr. Marquette Frye.  He was 21 years old, a little intoxicated, and completely unaware that his actions would ignite what would become the infamous Watts Riots.  Who was to blame for this terrible event?  You decide.  Nevertheless, this catastrophic event left 34 people dead, 1,032 injured, and 3,438 arrested.  The events that would follow Mr. Frye left him in a state of despair.  In fact, he changed his last name to Price, his stepfather's name, in order to escape the stigma of that violent day on August 11, 1965.  Marquette Frye died a little over 20 years later on Christmas Eve in 1986.  He was 42.  As Some reflect on the dark days of the 1965 riots, they believe that Marquette Frye died on the evening of August 11, 1965.  Peace in London ~ Read more...

I have a black sister-in-law [in England] whose mother is a Guyanese immigrant [in England]. She is one of those strict black women who believe in family values and being morally upright. She brought up her children with discipline, to believe that no matter how hard life is, you must work to achieve.

Many of the rioters were not blacks. And many were children. Where were their parents?

It's hard to read the paper these days, truly unsettling. With all the turmoil and uncertainty currently, I'm surprised more uprisings haven't occurred. Yes, I too am saddened by the events in London...

As I revisit this post, I am embarrassed to find how quickly I forgot about London. Nevertheless, the same things are still happening and children are still picking up stones in defiance [Baltimore].