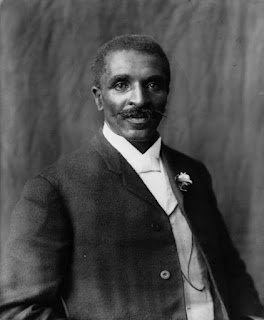 "When you do the common things in life in an uncommon way, you will command the attention of the world.” ~ George Washington Carver (January 1864 – January 5, 1943)


George Washington Carver was an American scientist, botanist, educator, inventor, poet, and a painter. Carver was one of the key figures we would learn about during Black History month. Carver, along with images of Martin Luther King, Jr., and Booker T. Washington were constant images on the classroom bulletin board throughout my elementary school years. As a youngster, I felt that Carver was brilliant in his discoveries of the peanuts, sweet potatoes, and soybeans just to name a few. He came up with hundreds of alternative uses for these common products, and changed the South from a one-crop land of cotton to a profitable multi-crop land.

It is safe to say that George Washington Carver helped to save the economy in the South – a region of the United States that, at the time, had not given even half the basic human rights to African Americans. Carver also did not make the potential thousands of dollars that he could have made from his inventions. He felt that God and Science were one because God is the inventor of all things. When asked why he never sold his ideas and inventions he replied, “God gave them to me…how can I sell them to someone else?” Carver also felt that Jesus Christ was the answer to race relations in the United States. In the end, those who followed his work took full advantage of his discoveries and inventions, but ignored his remedy for social ills through Jesus Christ. Find out more about this great inventor who was dubbed the "Black Leonardo."  Peace~
Sources:  invent.about.com, wikipedia
Book on subject:

Some how i landed here today, it's been so long :)) Have a fabulous new year Stephen!

Hello my friend! So good to see you. My new year has been a true blessing so far. I pray the same for you and your lovely family. Thanks for stopping by. I will do the same.