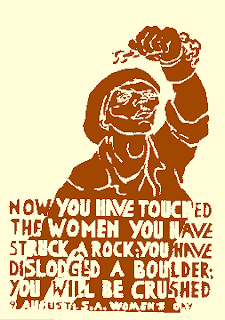 On August 9, 1956, women participated in a national march to protest pass laws -- legislation that required South African's to carry a document or "pass" on them to prove that they were allowed to enter a white area.  Since August 9, 1994, the day has been commemorated annually, and is known as Women's Day in South Africa

The march in August of 1956 was led by Lilian Ngoyi, Helen Joseph, Albertina Sisulu, and Sophia Williams-De Bruyn.
God bless those women and God bless South African women all over the globe.  I would also like to thank my courageous wife for her part in the struggle.  God bless you my dear - Ke a o rata - I love you.

I'd love to hear about her life in St. Africa.

I wonder if anyone's recorded / kept / stored all songs of struggles.

Long live Miriam Makeba, her death made me sad, but you know, her music lives on.

There must be a soundtrack to the struggle somewhere. I heard a few yesterday at a South African Women's Day celebration. It was a beautiful event. My lovely wife hosted the program.