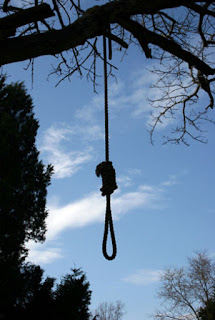 On this day, June 2, 1899, Black Americans observed a day of fasting.  This day of fasting and prayer was called by the National Afro-American Council in protest of the lynching and racial massacres occurring in the United States.  Unfortunately, these lynchings carried on through the 20th Century, and there are still reports of hate crimes in this 21st century.

, and Slavery by Another Name: The Re-Enslavement of Black Americans from the Civil War to World War II

I'm glad that there was a day of rememberance for lynching. It's such a brutal legacy and I can feel the legacy of violence whenver I visit certain Southern areas.

Hey Rosalind! I've felt that as well. I did a post back in 2006 related to that: http://civileyes.blogspot.com/2006/08/plantation-on-bay-part-2-healing.html

I had a strange reaction to a beautiful but painful place.

thanks for droppping by my blog.

I foresee a car in the near future too ... hopefully a shiny, PINK new one! lol

Have a good one and God bless!