By Corrine Luthy
The Enterprise


Stephen Bess, a 1985 graduate of Williamston High School, has published “Liquid Lunch: Blues-Inspired Poetry”, a blues-inspired book of poetry. Bess said much of the poetry was inspired by his time spent in Williamston when he was growing up. 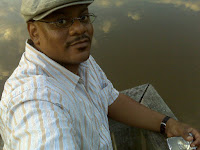 Bess was born and raised in the Washington, D.C. area, but spent many of his summers with his grandparents and family in Williamston. In seventh grade he came to live in Williamston and go to school, continuing his education and graduating high school here.

“These are my deepest roots,” he said of his family here, who has been in Martin County for more than 200 years.

He said during his time spent here he heard many stories from his grandparents, Tom and Eunice Best. These stories and his experiences with his family have influenced a lot of his poetry.

For example, his poem “Old Roanoke” is based on his memories of his grandmother’s cooking. He said he remembers his grandfather skinning catfish and his grandmother using it to make a large pot of stew for supper.

His poem “Faith” is also about his grandmother and his memories of her singing in the kitchen on Sundays.

“A lot of it is about food, drinking, and growing up in Southern culture,” Bess said.

His grandfather worked at the feed mill here for more than 20 years and was also a well-known cab driver around town. Bess said he was infamous for his slow driving and holding up traffic. An old army photo of Best is also pictured on the front cover of the book.
He said his time in Williamston also influenced his thinking and his love of literature. He was in high school when he first became fascinated by the fact that people could create images using only words.
“It is based on life, imagination, my grandfather’s life,” Bess said about the book. He said the book is also structured around his Christian beliefs and the ideas of sin and repentance. The book travels from sin, with the poem “One Shot,” to the poem “Supplication”, about repentance and forgiveness. Many of the other poems capture other moments of life between these two states.
Bess said both the blues form his poems take and the subject matter are universal and that everyone can relate to them.
Bess’ book is published through WordRunner Press and is available at Amazon.com. Bess is also planning on donating a copy to Martin Memorial Library.
Source: Vol. 111, No. 24 (page 6A) – Williamston, NC
Printed: Thursday, March 25, 2010
Above:  Author Stephen Bess, Above The cover of Bess' book of poetry, "Liquid Lunch", features an old army photo of his grandfather (on the right).
Note:  Article as is - There were no changes made in wording or punctuation
at 4/05/2010 02:33:00 PM

I find this just wonderful to read. Super Well Done and Congratulations on your incredible words, and their publication.

Sincere care and love to you, to Ratu, and to and your families

Michelle and my daft, darling Zebbycat over in Wellington, NZ

Hi Stephen,
Thank you for visiting my blog and leaving a comment. I guess you know how rare that is. You have a wonderful blog and I will link you on blogger. I tried to do it on networked blogs but it was glitchy.
Best,
Diane in Cal

Thanks, Mickle. Always a pleasure to hear from you and ZebbyCat. :)

@Diane - Thanks, I will link you as well. I love the haiku.

Thanks, Muser. I'll come by to say hello.

You're getting noticed, Mr. Bess. Remember me when you're famous :-)