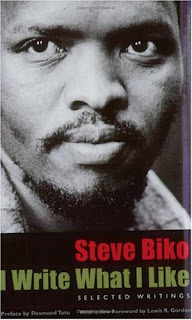 On August 18, 1977 – Stephen Biko, one of the most influential South African student leaders in South Africa’s fight against Apartheid, is arrested in Port Elizabeth on charges of inciting violence among blacks in the city through his writings. Stephen Biko would die one month later in police custody from torture and beatings. Today, he is still considered one of the most revered figures in South Africa’s fight for freedom.
at 8/18/2009 10:50:00 AM

Thankyou for remembering Steve. And congratulations on this beautiful blog (from a sister way over here in Australia).

Thanks Maxine! You're a great poet.

Ever the teacher and ever inspiring
Moved by great causes yet never tiring
So full of wisdom and sharing it freely
I’ve often wished like you I could be
But I know exactly what you’d say to that
Being the best me is really where it’s at
Still there are lessons to be learned from the best
So I seek to emulate you professor Bess
And I come to read, learn and pay homage
To my favorite blogger of the African lineage

Thank you for this reminder. I am reminded of Richard Attenborough's late 1980s film, Cry Freedom, which starred Denzel Washington. It was a powerful movie.