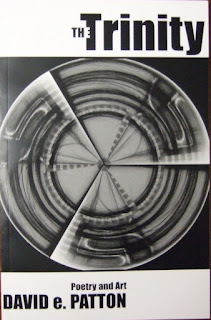 Poetry entered David E. Patton’s life in September of 1968. It was in St. Louis, Mo. and the Civil Rights Movement in America was in full swing. David describes his first poem back then as “a sixteen line alternating rhyme of youthful discontent.” Now, 41 years later, David presents to us, The Trinity. The Trinity is collection of poetry and images all created by David Patton. When I first saw the book, my mind immediately drifted towards the Biblical reference of the Trinity: God, Son, and the Holy Spirit; However, David is referring to what he describes in his introduction as the “Body, soul, and mind, the trinity of the self.” So, The Trinity, to me, is an expression of self, and a bearing of one’s soul – open to the public.

I’ve been reading David E. Patton’s blog for a couple of years and I’ve always found his poetry to be not only interesting, but very raw and unprocessed. It’s the difference between canned fruit and picking it from a tree. This is what I mean – he seemed to speak directly from his soul. That’s not easy for many writers...including me. In reading David’s poetry over the past couple of years, I didn’t always connect with or agree with everything I read, but I could appreciate that it was “him.” I saw that same “him” in The Trinity; plus, I enjoyed what I read. In his poem, “Let me be the Bard of Neutral Nature” he says,

“Let me sing with a mouth full of hearty words meant to praise till I am dead
and done then let my poems now garrulous in the fever of my want to beg that she
make a tool of me, let them carry on my songs to the yet unborn.”

That's beautiful! Many of the poems in this book touch on themes of Nature and Creation. It also expressed strong spiritual overtones that appealed to me as well. The other poems in The Trinity include titles like, “One Black Man’s Heart is Worthy,” and “Angels are Painting Poems.” Overall, The Trinity was a great combination of words and images (40 pages, $10). I feel it is a great price for what you get in return. The artwork on the front cover is one of David’s pieces, which reflects the title of the book. The photograph on the back cover is by photographer, Marcia Ward.

About the writer:
David Patton’s writing has appeared in Mad Blood, The James White Review, Rocky Mountain Arsenal of the Arts, Bay Window, 7, and Guide. His chapbook, Milk Bowl Moon over St. Louis, appeared in 2003 from Persistencia Press. Also an accomplished painter and sculptor, Patton currently resides in his hometown of St. Louis. For more information on to order The Trinity visit David’s blog: Uncle David.
at 4/08/2009 11:41:00 AM

thanks never read his work before

Stephen
thank you for your kind and honest words on The Trinity. Because of the nature of our work as poets we do not know if we have hit the mark and that the work of our hands has made a connection untill the readers get a hold of it and let us know. In my poetry I strive to be true to what I am daily learning about life and the world as I see it and think that all poets must tell all of their secrets in poems that non-poets know that they are not along in what they feel deep in the bones. I know this is not an easy thing to do but no one said that being a poet is an easy job. Most of us labor for a life time without recognition. Leaving a book behind when the body has given up the goast is proof that we pass this way and took the time to muse of this wonderfull things call life. Thank you again

I recently came accross your blog and have been reading along. I thought I would leave my first comment. I don't know what to say except that I have enjoyed reading. Nice blog. I will keep visiting this blog very often.

TStephens-
Yes, you should check him out.

David-
You've said it all. It was a pleasure writing this. Take care. Peace~

Ruth-
Thank you. I will also check out your website.

I'll check it out!

I will be sure, if I ever get free time again, to check him out. I also want to wish you and any of your readers who celebrate it, a very Blessed and Happy Easter!

Hey Stephen, I used to link to Uncle David's blog - don't know what happened as I don't have the link anymore - I stumbled upon his great poems once while surfing for poetry. Thanks for this reminder.