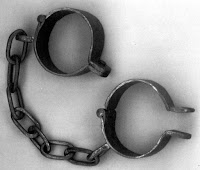 In the American system of slavery, African Americans had many ways to resist the dehumanizing conditions that existed. The songs they sang (known today as Negro Spirituals) had a purpose: they were sung to express their grief, petition to their God, and soothe the pain of bondage. Most of the songs were made up from stories they heard in the Bible, but they all seem had the same underlining plea – Freedom.


Here is an example:

He delivered Daniel from the lion’s den,
Jonah from the belly of a whale,
The Hebrew children from the fiery furnace,
Then why not every man?

Well, the ancestors were eventually released from bondage and entered into the American Aparthied system of Jim Crow. In these modern times, African Americans have marched, staged sit-ins, and fought up to the very moment Barack Obama was sworn in as president of the United States. So, what are we resisting today? What is the new resistance? What has the majority of us in bondage (mental or physical)? What do our resistance songs sound like? In the 60s and 70s we had resistance music: Sam Cooke sang that A Change [was] Gonna Come; James Brown screamed, Say it Loud, I'm Black and I'm proud; and in 1989 a group of Hip Hop artist like Chuck D, KRS One, and MC Lyte came together to protest Black on Black crime with their hit, Self Destruction. Honorable mention: All of Bob Marley's music. Can you think of any resistance songs of today? Is is all "Underground?" Help us out:
at 2/04/2009 11:17:00 AM

Such true words. The spiritual brought tears to my eyes. There is truly no time to rest. The "march" must continue. Wait that felt a little too easy for me to say.

SB,
I love your timely post. At a time when I am putting up resistance! God is giving me a testimony, just a little while longer ...

How about the timeless 'Redemption Song' by the one and only Bob Marley
'I Wish I knew How it Would Feel to Be Free', 'The Backlash Blues' -Nina Simone
'Putting Up Resistance'-Beres Hammond
'Til I'm Laid to Rest' -Buju Banton

'Give Me Jesus' In the morining when I rise, give me Jesus...

These are not very new, sorry.

Poeticpin-
Great list old or new. Good to see you.

that spiritual is an infamous Ailey piece - part of Revelations.

Great post Stephen. I think now is a good time to reevaluate our political positions and focus more personal empowerment than freedom. Cause we can be more free than ever before in body and in spirit.

mental and spiritual bondage are just words to young african americans, they read it, but they do not grasp the seriousness of what their forefathers went through.The things that are important to them, are material.that is the reason why all there songs are about what they have,what they can get and who they can kill.

A really insighful post. I think resistance songs take on different forms today. Nas' untitled album was full of them and so was the one before that. But the most unforgettable recent resistance song that I can think of is "Come A Long Way" from Tanya Stephens "Rebelution CD of 2006. It was ground-breaking on many levels but this song was the most noteworthy. It's telling that it's sold thousands of copies and has lyrics available for every song on the CD except this one, even 2 years later.
Here are some verses:

During Apartheid, South Africans sang and danced at funerals. It was a safety valve, of course, but I also think if they didn't, they would have been diminished somehow.

Good stuff! I need to find some of this stuff on YouTube.