Artist spotlight is becoming my thing to do here at Morphological Confetti. I sometime stumble upon great artist and I just want to share them with the rest of the world – the MC audience.

Recently, I did an image search pertaining to African American history when I came across a wonderful piece of artwork created by painter and photographer, Cedric Smith. My first reaction to his work was that of extreme admiration; I was impressed. Smith’s beautiful and colorful images resembled old ads from the early part of the 20th Century. Smith says that his inspiration and influences are drawn from the Georgia landscape and its people. Smith’s memories growing up and nostalgia also play a significant role in his work. As many of you know, the ads in America’s early years were often racist in its portrayal of Africans in America. Cedric wanted to change this negative perception. The difference in Cedric Smith’s work is that the images are positive and appealing; for instance, there are no oversized pink lips with boot black skin, shiny-white-bugged eyes and a toothy grin. The subjects are all just pleasant looking people (old photographs) of African descent representing familiar and not so familiar products. Some of subjects are also caucasian to truly reflect the old southern landscape. The southern landscape is also used as a backdrop for old photographs that he positions within his own photography (see below). 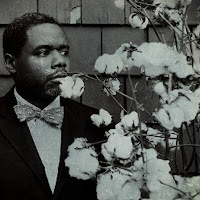 Cedric Lamar Smith was born in 1970 in Philadelphia, Pa., but raised in Thomaston, Ga., where his family moved with him as a child. Smith grew up and took up barbering as a profession and means to support himself. Cedric’s entire perception of art and living changed one day when the late African American painter, William Tolliver sat in his barber’s chair. Cedric overheard a conversation Tolliver was having on his cell phone about a studio. Cedric thought that Tolliver was a musician until he began to ask questions about Tolliver’s work. He soon found out that William Tolliver was a successful painter. Well, that brief conversation with Tolliver led Smith to turn in his two week notice at the barbershop.
The rest, shall we say, was Smith-story. Cedric Smith took that step of faith almost 13 years ago and has never looked back. Now, Cedric Smith makes his living as a painter and photographer. His artwork can be seen in galleries and homes throughout Georgia and the United States. Cedric Smith has the heart of a true historical preservationist and artist. He is truly an inspiration to anyone who has ever dreamed of doing what they love. God bless him.

This post has inspired me in ways that will take to long to write at this moment.

Smith's work appeals to that side of me loving history, especially Afro American history which is a passion of mine. I am admiring how he turns the negatives over to make a postive.

Thank you this posting.

Stephen Bess YOU ARE THE BEST!

I love this work. Thank you for bringing this to us! This is your calling. I hear it loud and clear.

Now off to find out more about this dynamic artist!

small world
i met him before

Thank you for the spotlight.

I haven't been to your blog in a while, but it looks wonderful.

Wow, this was a great spotlight. I checked out his work & it is awesome. I LOVE "Slave Ad"!!!

His use of old Negro photos is genius!

It's people like Cedric Smith who keep me going, even when I feel disheartened, like giving up sometimes.

I'm going to send this to my cousin Lis who paints life in Guyana.