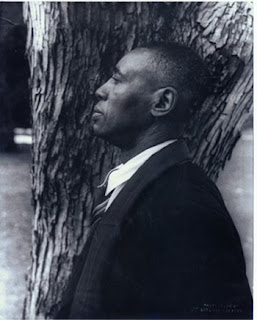 Horace Pippin (February 22, 1888 - July 6, 1946) was a self-taught Black American painter born in West Chester, PA. Pippin served in the 369th infantry in Europe during World War I, where he lost full use of his right arm; he would no longer be able to lift it past his shoulder. This did not prevent Horace Pippin from painting when he decided to pick up the paint brush around 1930. However, it took him three years to finish his first painting. The images he painted primarily featured everyday Black life, historical figures and scences from his childhood. His style was known as Naïve art, which is characterized by a childlike simplicity. Nevertheless, Pippin's scenes and subjects in his art were powerful and inspirational in their content. In fact, I'm wondering if he had some influence on the late Jacob Lawrence is was similar in subject matter and simplicity. I had a chance to see one of Pippin's paintings this past Wednesday at the National Portrait Gallery here in Washington, D.C. I am definitely a new fan. It has inspired me to seek out other Pippin paintings, some of which are featured in other galleries in DC.
Sources: Wikipedia.org, the National Gallery of Art (NGA Classroom), Whitney.org and Smithsonian

Pippin is one of the greats. If you get the chance, check out this book A HISTORY OF AFRICAN AMERICAN ARTISTS BY Romare Bearden and Harry Henderson.

Didn't know the dude, but glad now that I do. Happy every time I stop by.

Naive art with a great eye for detail, chipped wall and all.
And what tenacity...he too 3 years to finish his first painting but he didn't quit!

I wonder if he's related to Scottie! just kidding...i'm just in basketball mode.

Bronze-
Thanks for that info. Yes, he is definitely one of the greats. I love his work.

Rethabile-
You're welcome sir. Good to see you!

GG-
Yes, he was determined. We could all learn from that example.

Lyre-
lol. I thought of that too. Who knows...they spell their names slightly different.

Naomi-
You're welcome and thank you for stopping by.

This is a phenomenal story. Thanks for sharing it. Hope all is well.

My kind of art.

The name of your blog.

What a great find!

I always read something fascinating on this blog, Stephen.

ACT-
Thank you. Yes, all is well with me. I am truly blessed.

ChiefB-
Yes, I love it. Welcome.

JO-
Yes and it's so inspiring. Welcome.

Rent-
Yes, he was an interesting and talented artist.

all-mi-t-
Yes, it was the first I heard of him too. I happy that he found us.

I think I recognize his work, but not the name. I can see where Lawrence may have been inspired by Pippen's style. I love his use of color and perspective. Thanks for turning me on to his work.

I am so glad that I followed the link to this blog. Interesting post. I have learned something new. Now I will be looking for more of Pippen's work.

I've never heard of him but sharing this with us gives me great insight about his work, he was good.