The Sage of Anacostia: Frederick Douglass 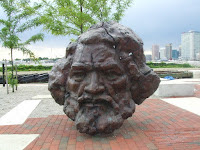 "One and God make a majority"~ Frederick Douglass 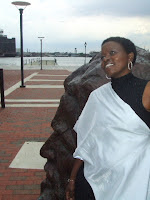 Who is Frederick Douglass?


These photos were taken over the weekend at the Frederick Douglass Isaac Myers Maritime Park in Baltimore, Maryland. We gathered there to celebrate my great-aunt's 80th birthday. I'll have to go back to Baltimore to take a closer look at the exhibit real soon. Happy birthday aunt Pearline! 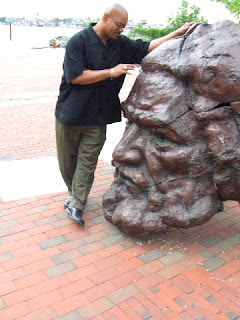 (The photos feature quotes by Frederick Douglass on prayer and God)

(And what are you doing to Frederick Douglas in that photo, Bess? 'Somebody get this man up off me!')

Give thanks for keeping the memory of the great man alive.

Yes, and I also want to tell a new generation just in case they don't know. I think that everyone should know who Frederick Douglass is, but...
Thanks Geoffrey.

The young 'uns need to be told, indeed. This is good.

Stephen - Thank you for sharing the photos and the post. Powerful material. I realized as i read through the information that I don't know as much about Frederick Douglass as I should...

Mr. Douglas had a very inspiring life.
I love when you post all those links on african american history!

Rethabile-
Yes, they definitely need it.

Villager-
Same here. I found out some things I didn't know either.
That's the beauty of research and learning.

Pearline is such a beautiful name! Happy birthday indeed! 80 is a blessing! =)

I'll have to visit this park as well. Never been there before.

UB-
Thanks! Yes, and she is a lovely lady. It was my first time at the museum. It's really nice there. They have great artifacts inside as well.

A reason to go to Baltimore!

LOL! :) Professor, I like Baltimore, but most people need a very good reason to go. This is one.

I mean - the Frederick Douglass park, a really good reason - I always used to go to B. for family reasons but of course we never got to see this and, not doing my research on the area, I did not know it was there. Got to go!

Professor-
Okay, I see. I need to also visit the new Museum of African American History Culture. It's a shame I haven't been there.

LOVE THE QUOTE BY FREDERICK DOUGLASS!!!

Yo what's up Stephen Frederick Douglas is a hero of mine. I have put together a black history audio blog that is still comming together anyway I posted an audio recording of the memoirs of frederick douglass.

Here is the link to it right here http://markbey.wordpress.com/2007/04/03/frederick-douglass-on-cspan/.

Anyway when you get a chance check out the audio black history blog I am currently working on @ http://markbey.wordpress.com/

Also I am sending you an email about a history project I am working on.

Mark-
It's cool that you're working on a history project. We're brothers of the same kind. :)I'll be looking for your email. Peace~

Yes, Sir! Faith without works is dead. Our faith brought us thus far.
Thank you Mr Douglass for your great example, and contribution. Who said we don't like education? How can we not like education if we are cut from the same cloth as the likes of Frederick Douglass!!

Thank you Stephen for conscientizing the masses. Much love to you and yours **wink**

Tryphena-
Well said! Yes, we must step out in Faith. We have to...we must! I must! :)
Many blessings to you and yours as well. Peace~

The new page pic is AWESOME - great idea. It adds a whole lota soul to an already abundantly soulful blog.

I love that header picture...fabulous!

Dance-
See, you're a lady who appreciates soul! That's what I like about you. You're awsome too. Thanks. I didn't want to solicit any thoughts on it so it makes me feel really good that you noticed. I love it too. I tried two other pictures and this one seems to capture my heart and what is in it. So, many many thanks. *hug*

Dawn-
A big thanks to you as well and hello! :)

By the way, the artwork is by a South Carolina artist named Jonathan Green. He's fantastic!

Hi Stephen! Sorry I have not been around, I had to put my bestest buddy down. (My kitty Luther after 12 years together) He was really sick though, so he is in a better place now! But I still miss him. So, it has been a tough time, but I am back on the up and up now.

I am going to have to catch up on your blog. I LOVE the new picture, and now I have another reason to go out East on vacation.

Faith-
Hello! I'm sorry about your buddy Luther. We become so close to pets. They are like family and sometimes we love them more. :)Yes, he's in a better place. I appreicate you stopping through. You like my picture? Yes, I like it too. It captures my essence. Yes, come East. We would love to have you in our town. Peace~

"I prayed for twenty years but received no answer until I prayed with my legs"~Frederick Douglass!!!
Am loving it so much! Definately so True!

Klara-
That quote is so inspiring isn't it! Yes!

I was about to ask (duh!) what the qoute meant until I read comments. Praying with you rlegs...I love it! I need to read more of his works. I wonder if any of his works are on CD?

Lyre-
lol. That's right. We can't pray for something and not have the faith to step out and do it. I've never heard of Frederick Douglass' work on CD, but maybe there is.

Ohhh!! Stephen, I am loving the artwork you added to your blog! Great choice!!

Oh how fantastic! I haven't been to Baltimore for a visit in a minute. I'm going to make my way up there soon. Thanks for sharing these!

simple but yet powerful words...there's a movie called amazing grace...about willaim wilberforce...your take on him?

Cathy-
Thank you! I enjoyed that day.

Blkfeline-
He's a great abolitionist. The thing I like most about the whites who fought against slavery in those days is they had nothing to gain from it. Freedom for all was their main concern.
Today, politicians have their own agendas when it comes to the rights of Latinos and Blacks in this country. Well, that's another post. Peace~