This post is in honor of Memorial Day. This is a list of a few good men from my days in the Navy (1985-1988) stationed aboard the USS Theodore Roosevelt (CVN-71). We were part of the ships first crew when it was commissioned in October of 1986. This is what I remember about those men: 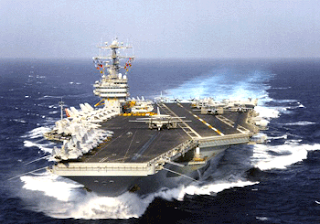 You scream I'm
lazy, you must be crazy
Thought I was a donut, you tried to glaze me”

I miss you man! Peace~

Msg to Reginald Davis of Reading, PA: Reg, you are the only brother I am in touch with from the Roosevelt. You were as wild as they come back then, but you’ve come a long way. You're a family man now, but you gave new meaning to the word, “AWOL” back then. Plus, remember the time you almost got me arrested in Newport News? Reg, you was a something else man! Over the years, your family became my family and I love all of you. God bless you and your family. Peace~


Msg to David Glover of Gary, IN: You were our age, but you were a big brother to Reggie and me. You was a big happy dude with a big ol’ smile. Hey, remember the time we all rented an apartment in Little Creek, Virginia? Yeah, we had some good times...didn't we. I hope you’re well. Peace~


Msg to Glen Bosarge of Biloxi, MS
You were one of the coolest little guys I’ve ever met. *smile* The chief called you “the little ugly man,” but you were not at all. You had a beautiful and wonderful spirit despite all the guys picking on you. You were my friend. You told me that Mississippi was a beautiful place despite it’s ugly past. Peace~

Msg to Kevin Crampton of Alabama: Crampton, you would crack up laughing every time I started rapping/singing “La Di Da Di" by Slick Rick and Doug E. Fresh. I don’t know if you remember, but you once told me that I would be a great man one day. You told me that I would probably be a senator or some other important person. Well, I have no political plans or aspirations, but time will tell. Thanks for the love and peace~


Msg to Brian Tillman of Detroit, MI: You and your other boys from Detroit didn’t like me very much. You all said I thought I was too cool. I liked you though. You were funny and the fellas used to call you "baby talk" because of your lisp. By the way, I am still the coolest. *smile* 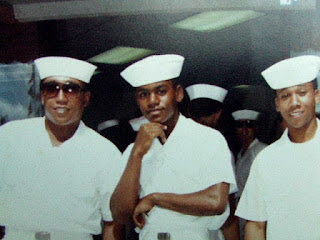 Msg to Marlon Sherrod of Birmingham, AL:
You were the coolest brother I’ve ever seen outside of television! You were the sharpest dresser and a complete ladies man. You also introduced me to the music of Anita Baker and Jazz saxophonist, George Howard. Are you still sharp? Thanks and Peace~
Msg to Saxon from the Bensonhurst section of Brooklyn, NY:
I don’t remember your first name, but we would hang out every now and then. You told me that I was the first black guy you've ever hung out with. Remember the time our ship pulled in to Nassau and we went over the hill when they told us not to? We had a good time that day until this guy on the Island tried to sell you oregano for marijuana. He didn’t know that your mother is Italian. I hope all is well. Peace~
Msg to Louis Urso of Brooklyn, NY:
Louis, remember the time we went to the Maze (Featuring Frankie Beverly) show at the Norfolk Scope back in 1986? The show also featured the groups, Ready for the World and The Whispers. I got up to dance when Maze came to the stage. I looked back and you were just standing there smiling with your arms folded saying, “I love these f*cking guys! I can't wait to tell my brother!” You were one cool Italian dude. *smile*
Also:
Honorable Mentions~

Msg to Carlos Correa and Selwyn from the Bronx, USA:
You were my Puerto Rican and Jamaican boys from the Bronx. We were all in Boot Camp together down in Orlando, Fl. in 1985. We were the Division ll/Blue Knights. Carlos, you always told me that you would take me home to meet your parents. You said that your mom cooked the best rice and beans in the Bronx. I’ve always felt you were a better friend to me than I was to you. Selwyn, you were just one funny brother. You kept us laughing and you were a good friend. Oh yeah, you had pointy ears. I love you guys. Peace~
There were many other guys I didn’t mention and others whose names I can't remember. Hey, it was over 20 years ago! Nevertheless, I hope that they are all well and that they are leading productive and rewarding lives. God bless them all. Have a great Memorial Day weekend and God bless the young men and women who are still in Iraq. Also, God bless the people of Iraq. Peace in the Middle East~


I found you on the Internet, and was extremely impressed with your writing talent. I have not forgotten my friends , but I was surprised you wrote about me. I remember you as a very easy going guy with a great personality, from what I read you have only matured with age...

Great post and memories...
Have a great weekend, Stephen!

Geoffrey-
Thank you brother. I hope your weekend is a pleasant one. Peace and one love~

I hope these bros read this and get back to you. Ties are made to stay tied. Sounds like y'all had yourselves good fun on that boat.

great post. i heard on the radio today that Memorial Day was first celebrated in 1865 by former slaves. this is supposedly according to a Yale study. being the history buff that you are...i figure you might want to research it & report back to us. lol

Rethabile-
I was depressed at times when I was in the Navy, but there were some good times too. This is how I am able to hold on to the memories.

Pwife-
Wow! For real? I didn't try to search the history at all, but now I want to. :)Good to see you. I hope all is well. Peace~

Pwife-
Okay...it's on the link that I have to Wikipedia. It's in the history. I linked and took it for granted because I thought I knew what Memorial Day was all about. Thank you for bringing that to my attention. I guess the lesson is to carefully read my what I link. :)

Alex-
Thank you sir. It took me back down memory lane.

Sugar-
Thank and good to see you again.

You were SO cute Bess,

But on the real how did you keep your uniform uber clean? Thjat white is gleaming.

Ahoy captain! :-)
A beautiful & extraordinary post, Stephen.
And how I do love your banner.

Thanks for sharing and I'm impressed with your memory. Have a great weekend x

I absolutely wanna support your message: PEACE IN MIDDLE EAST!

Gooders-
Long time. Thanks for the compliment on young Stephen. :)It was so hard to keep those uniforms clean.

Susan-
Hello and thank you.

NML-
Thank you. I keep them stored properly and I take plenty of vitamins. :)X

Another beautiful post. That is super to keep the memories alive by talking about them and sharing them with us. Thank you! I hope your weekend was good. Mine was. I adopted a new kitty. He is 2 and a shelter kitty. Black and white with green eyes. He is just want I needed again. So, have a great day!

Faith-
Thanks and congrats on your new kitty! He sounds cute. I'm glad to hear that your weekend went well. I was all over the place this weekend. I'm a little tired today, but I think I'll make it. Take care and have a wonderful day my friend. Peace~

HAHA. Loved this post. Hope you and the MRS. had a great holiday weekend. Kiss your wife for me. HUGS!!!

Dance-
Thanks! We had a great weekend. I hope you did as well. I will deliver those hugs and kisses. :)

Stephen, this is such a sweet post. It brought tears to my eyes, feeling the close connections between you and these young men. I lol about the oregano :O Too cool!

Beautiful dedication, thanks for sharing this with us and for stopping by my blog. Feeling much better :)

it's good to have a few great friends to grow old together (besides family members)...much better than silvers and golds..:)

Zapped-
Yes, the memories are great. I wanted to write them down before I forget.

Cathy-
I'm happy to hear that you are better. Thank you! :)

Blkfeline-
So true. I'm not sure if I'll ever see any of these guys again, but maybe this post will reach them or a family member.

Once again, a new, nice personal angle on life. I smiled all the way through the read, it's human, warm, alive & funny. And a complement of 6,000 or more on board and these guys are all you can remember, Stephen? Only kidding.
A personal reason for appreciating this insight is that because Lisbon is usually an R&R stopover for US carriers, I have 2 great friends that I met when the USS George Washington parked in the Tagus Estuary for a 6-day break in Oct. 2002. That autumn when Iraq was cranking up & tensions were rising. These were young IT specialists, but you remember my "Those who ask "Why?"? These two, Jason & Tim, were full of the right questions, as well as being great tourists. So, we started talking in a café on their last full day & finished 4 hours later after dinner when I dropped them at the ferry dock. It was lucky for me - they wanted to know what Europe thought of them, the approaching war, they weren't happy about it, but had their duties to carry out. They were open to hear everything, a long, deep, serious & fair discussion. And as for learning, I couldn't have learned more about life on a ship & realities inside the US Navy any other way. We've kept in touch ever since. I even smiled at your mentions of Little Creek & Newport News! So, as strongly anti-the war as I was and still am, I have nothing but respect & admiration for guys like that. And my friend's son who finally got home from Basra after his 2nd & final tour yesterday.
Sorry this has been so long, but you know something? The way I've always seen it - and these anecdoters of mine support it - When you allow a human dimension, face-to-face dialogue between respected equals, that makes forwarmth, light, understanding, it makes it real hard to think of "the other side" as your enemy. Know what I mean? And big loving thanks for yesterday too! Peace always.

Oh yes! The George Washington came along right after my ship. I think that they are CVN-72 or 73 because the Abraham Lincoln may have preceeded them. Thanks for this comment. I don't mind the long comments at all when they are filled with so much meaning. Yes, that human contact makes all the difference. It's good that those guys wanted to know what others around the globe thought. I'm glad to hear that another soldier is back home. May God protect and bring the rest. Amen.
Thanks brother Stewart and peace to you.