Good afternoon! I thought that I would share part of my everyday life with you today. I spoke to my father last night. It’s always good to talk to the reverend these days because we have more to talk about since I’ve become an adult. We have similar interest. What are our interests? Let’s see, we talk about books and books and…well, more books. 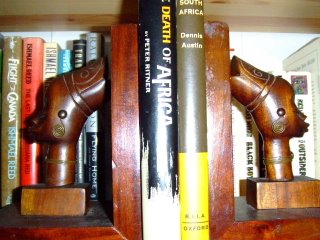 He reads a lot about African politics and religion, but he is especially interested in South African politics. He travels there occasionally and Cape Town is his favorite vacation destination. So, you can imagine his surprise last year when he found out that I was getting married to a woman from the RSA. He was so delighted that he paid a visit to my new mother in South Africa to seal the union!

Nowadays, he is intrigued with my renewed interest in writing. This is something that he encourage me to do when I first graduated college in 1994, but I had other things on my mind like a JOB. *smile* So, now that he knows that I am writing he calls me to check on my progress. I can appreciate that. Besides, it’s good to hear from him either way. I thanked him for encouraging me years ago even though I didn’t act on it. Well, I did get an article published back then, but he could see beyond articles. So, thanks to all the parents who took the time to look over that mountain for their children. I know that it has made a world of difference for a dreamer like me. Dad, I love you. Peace~
at 12/11/2006 11:45:00 AM

Dear Stephen,
Respect!
Much love to your father.

Aaaw, that got to me, Stephen. Why? Because I miss my Dad, still after nearly 10 years. And it is the best that you express your feelings to yours like that, let him know, as it's always NOW that matters most. The last words my Dad ever heard me say, yelled down the phone after a cutsomary 90-minute conversation was: "I love you, Dad!". I am eternally grateful that I managed to cram that in.
It's a sweet story you tell, of his trip to the RSA. May the good warm light shine on you all!

Geoffrey-
Thank you! He had tough love, but many things turned out to be true after experiencing life a bit. He's a good man and father (like I know you are). Thank you for your blessings. :)

Mile-
Thank you. I appreciate what you've shared about your father as well. Yes, it's great that you were able to let him know that you love him. This can be a very daunting task for some men.

You and wifey need to see Blood Diamond... amazingly disturbing. . .

love the bookends in the pic. Hard to find bookends nowadays...

Bougie-
We thought about that movie, but she wants to see King Of Scotland. I found those bookends a couple of years ago in a consignment shop. I love them!

Here at Michael J. West Enterprises we are 100% pro-father. I talked to my dad this morning too, and coincidentally he was giving me notes on something I had been writing. So yay Stephen, and yay your dad!

This is very touching. Especially since I know a lot of men who don't have such an open and loving relationship with their fathers. Also, my father always supported my artistic talents, even when I didn't believe in myself. I honor him for his support. Lets keep the faith alive through the children in our lives!

aww Stephen this is a wonderful tribute to Pops! And it is great that you honor him while he is still here.
He sounds fascinating.
Tell him I got him covered if he goes north to Zambia :)
I am in love with fathers who encourage their sons to be the best they can be...especially when 'their best' isn't the typical macho thing like say writing :)

I don't know why I thought you and my sister had been married longer...y'all are still newlyweds.

Thank you Mwabi! :)It's a year for us this December! Yes, we are newlyweds, but I feel like an old papa! :)No, it's been a very good year.

Zapped-
Thank you! We honor those fathers and mothers who have prayed for us and supported us through thick and thin. Amen.

Wow!! Thank you for sharing. Having a relationship with your father is a child's innate, inherent right. However, it's a blesssing to have a functional, and true relationship with your father in today's distorted world. My father was the most humble, yet the most proud man(human being) I have ever known. He checked-out three years ago; sometimes it feels like yesterday. He was excited and ready to go. He had this open-relationship with God, they communicated quite a bit. I love him so much!! He is the best father ever!!

Big hug to all the responsible Dads.

Try-
thanks for sharing about your papa. It sounds like he still lives with you and near you. That's wonderful. I accept your hug since I am a responsible pappy too. *wink*

I had to come back to share a bit more about Pops. Mine passed on almost 2 years ago and he spoke to me in my dream this morning. It just occurred to me upon returning to this post that perhaps, this discussion opened the door to our communication. May sound silly, but this is where my thoughts went. Anyway, I thought is was pretty cool.

Zapped-
That is cool! I believe that they sometimes visit us in our dreams. There are those who feel that it's just the mind dealing with separation, but I happen to feel that they are somehow allowed to communicate to us in our times of needs.

King of Scotland--another good movie i've yet to see. . .

Bougie-
I thought that it was well done. I need to see if it's still playing?

Is this man your real father or somebody with whom you like to be ?
It is always good having somebody confident and trustworthy to discuss about what we are interested. Or being just near us and look after our job

Cergie:
This is my real father that I'm speaking of. He's been a real support. This is especially true over the past year.

I wonder if the dreamer-children worry their parents the most?

You're lucky you have a good relationship with your dad, so many fellas don't.

GG-
I know I worried my folks with all kinds of questions. Thank you. I feel blessed.

That's wonderful that you two have interest to share. Fathers can be the most important person in the life of a man as he's matures. It is good to know that as an adult the understanding only gets better.

What would we do without parents? Not much. Great post here.

My desire
Is this will inspire
Those who shirk their responsibility
Of nurturing boys to leave a positive mark on society.

More power to you and your Dad!

"He was so delighted that he paid a visit to my new mother in South Africa to seal the union!"

WOW, that is so impressive.

My father is the same, Stephen. An avid reader and also a firm encourag-er of my writing ever since I was little.
A thoughtful heartwarming post.
By the way, thank you for stopping by and all the comforting words.
Much appreciated.

Xavier-
Thanks. My father impressed me when he did that. He wanted to stay with tradition because my wife comes from a very traditional family.

Susan-
Always a pleasure. Yes, we are blessed to have supporting parents. Take care~

Analia-
You are too kind. :)Thank you and welcome.

SB - I agree with you entirely. They never really leave us.

No matter our resistance, their wisdom stays with us - thank God. You are a credit to the Rev. (nice to know that tidbit)

Uaridi-
Thank you! Yes, I have been gathering that wisdom that has sitting in the archives of my mind and applying it when needed. :)

aww it's good you and your dad have something in common. Keep your writing, don't put that pen down.

sorry to reply you so late, i am terribly busy with my thesis revision.

It's so good that your father is so romantic that he can talk about books and writings with you, my elder brother does the job instead.

p.s. the photos are very nice, i like your new profile picture, it got the feeling of a clean, beautiful time tunnel

I loved the line in this post "So, thanks to all the parents who took the time to look over that mountain for their children." You always write beautifully :-)

NML-
Thank you! Papa is inspiring when he wants to be. :)

Nevah-
Never Never will I put down the pen! :)Thank you.

Lamkaho-
Hello my friend in the East! It's good to see you around. I'm happy to hear that things are still moving forward. I wish the best and thank you for the holiday greetings! I wish many blessings and greetings to you and yours. I'm glad that you like the profile picture. It was a long night and I was waiting for the train. I was sleepy. :)

Thank you for answering, stephen

Merry christmas, dear Stephen, for you and all your family and friends
It will be a tender time, being all together, I hope so

Cergie-
Merry Christmas to you and your family as well! Many Blessings~

i envy u...u have an intimate relationship with your dad...not me...anyway it's too late now..he has gone home!

Hmmmmmmmmm, the bookends are lovely. Did you guys talk about my book? I would love a review and be honest :) It's nice when you have much to talk about as adults, cause you know as teenagers, well that's a different story

this is a pretty cool book stand .. now at first it looked like two small guns to me .. but i think they are aaa .. it's a face on the opposite direction ..

dang @ they occurred as small guns to me ..