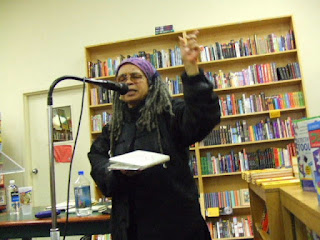 I had the pleasure of attending a book signing event over the weekend. First, I should mention that Vertigo Books celebrated its 15th Anniversary; the event was hosted by Bridget Warren. Bridget is a very nice lady and works very hard to bring to us renowned and not so known authors from around the world. I especially love Vertigo’s title selection, which focuses on African, African American, Caribbean, and Latino literature. I first visited the store in 1996 when it was located in downtown Washington, D.C. (DuPont Circle). The stores present location is in College Park, adjacent to the University of Maryland campus.

Now, the highlight of this event was a visit from poet, activist, and Professor Sonia Sanchez. Your boy Stephen Bess was in the front row! Smile. I had to get there early. I have admired this woman for years since my college days in Savannah where I first learned of her work. She didn’t wait for her introduction upon arriving and immediately started chatting with the crowd that was already in attendance. Finally, the place was filled with her fans. Professor Sanchez asked for extra chairs and immediately started directing people to their seats. One could immediately recognize her as the mother, grandmother, and auntie that she is. She also recognized former students and other writers in attendance, including poet and social activist, Tony Medina. I just watched and smiled.

Professor Sanchez shared with us her upcoming trial on December 1, 2006 in Philadelphia. Why? Well, she got arrested for protesting the war with an organization called, Grannies for Peace. Sonia Sanchez, along with the other 10 women who protested, was charged with Defiant Trespassing. She is asking for the support of everyone that can attend. Professor Sanchez also spoke on the importance of supporting our young people (especially young writers). She told some of the young people in the crowd, “THIS IS YOUR CENTURY!” She went on to state that young people need to “understand their history and herstory.” She also spoke about young upcoming poets and Hip Hop artist. She implored older and establish writers to “give inspiration to young writers.”

Professor Sanchez also shared some of her works and spoke candidly about her relationship with her father and brother. Despite the emotions that were attached to some of the poems, she went on to read more than 3 of them in length. I wanted to buy all of her books and some, but my budget permitted me to only purchase her book, Does Your House Have Lions? In the end, I was happy. I got my book signed and said my special hello to Professor Sonia Sanchez. I expressed my love and appreciation for her work and I let her keep my pen that she signed my book with. Well, she laughed and said that she was going to keep it anyway. Thank you Professor Sanchez for blessing us with your presence and God bless you.

Thanks for sharing this with me Brother Stephen.
I never heard of Professor Sonia Sanchez or Grannies for peace.

What is interesting to me about her arrest is that people in our generation don't protest things we are against. We let the government make decisions for us with no input whatsoever.

It is in Prof. Sanchez's blood to protest... she lived during a time when that was what you had to do to be heard.

I like that she supports the youth, I'm doing my best to come up and make a difference. But its hard to make change without support.

JB-
Yes, definitely check out her poetry because she is the truth. By the way, stick with that attitude and you can be one of the leaders of that movement. You would gain support through your passion and dedication. You go sista! :)
Thanks!

From what I heard, from what you got me to hear, Stephen, the gal is it, the real deal. I liked her candid style that lies somewhere between blues and African chants. I liked the repeating things for emphasis. It worked well.

I didn't know her, but thanks to you, I do now. I'm sure you had a ball, listening to her.

Rethabile-
You're welcome! Oh yes, I had a ball just listening and observing her. She's a wonderful person and straight up grassroots activist. She coming out with her biography next year. I can't wait to read it.

Sonia Sanchez has always been one of my favorite poets. I fact, buried somewhere deep in my library is one of her first chapbooks. It's older than my children.

Geoffrey-
I can just imagine that library. :)

What a fine, vivid and yes, alive report that was, Stephen. I greatly appreciated it, could truly feel your joy & passion, though I too have to admit that Sonia Sanchez is new to me. No matter, we're here to learn, right? And your narrative certainly teaches, as do the photos (I really dig the sax palyer pic, BTW!). Vertigo, do they publish too? I know this name. But what I just can't get my head around is the notion of 'Defiant Trespass' - is this some Homeland Security trip that Ashcroft or some Bush Crony dreamed up? Sounds more like Orwell. The semiotics of that title! Long may Sanchez and all the Grannies Get Up, Stand Up & Defy!!! What a wonderful world! But brave & beautiful too, with such people in it!

Hi Stephen,
Thank you so much for visiting my blog yesterday and hope you'll stop by again.
I wondered if I could linkyou on my blogroll.

By the way, what a gorgeous blog you have. But like you, I too, will return for a closer look. Lots of goodies, I know.

Your description of this was very interesting. What a blessing that you have a chance to meet all these wonderful people and attend exciting events. But I had never heard of Grannies for Peace before and so I stay completely fascinated.

I love me some Miss Sanchez, she is such an inspiration. I can only imagine how psyched you were being in the same room with a talented creature. I have a couple of her books and a DVD where she performs at the Def Jam. Wow, thanks for sharing this with us.

Stone-
You are most welcome sir. You know, I've never heard of "Defiant Trespass" either until Professor Sanchez mentioned it. However, there is no telling what the Bush Admin is dreaming up in their last days.
I'm happy that I can introduce you to a fine lady, great activist, and eloquent poet. I was completely in awe of her presence. Thanks again.

Susan-
Welcome and thank you so much for stopping by. I'm honored that you want to put me on your blogroll. Thanks!
Yes, I try to make it to the events offered here in DC. It's always a pleasure to be around such talent and truly inspirational. The blog world offers that same inspiration. I happy that you like my blog and I hope that you get more from it when you look around. Peace~

Delaleu-
Yes, it was my second time in her presence and she was just as wonderful as the first. She is so cool and such a loving woman. I remember getting the same reception from Amiri and Amina Baraka when I met them. They were just wonderful and very humble despite their great achievemments. I can't forget your girl Edwidge Danticat. She was wonderful too. By the way, you sound like you have quite a selection. Nice.

"Defiant Tresspass huh? It is really funny how "Supremacy" just evolve into different creatures every time. It seem to me they make up the laws as they go.
I remember back in my day when the government could charge detain you without trial as long as they wish.

In addition, if two or three of you get together it was "Illegal gathering" Well, if you happen to pass by while there's a riot, you could be charged with "Common Purpose" The likes of Sonia Sanchez would be charged with "Subversion" "Sabotage" ofcourse they always invoke the sensitive phrase "Terrorist" Thanks for the catharsis!!!!!
I still get sick to my stomach knowing that even in our "Democratic USA" Elders (and I mean this in the fondest form) can be charged with "Illegal Tresspass"

I think it's about time we stand up! Stand up! and emancipate ourselves from mental slavery. If the government can torture Sonia Sanchez, who do you think you are?? If we don't stand up now, we are doomed to suffer individually!!

Whey!! Sorry I get kinda incensed by the prevalent "Mickey Mouse Freedom" mentality.

There is for instance an autor, jorge semprun (writter, poet and philosopher, he was also minister in Spain) whose books i love very much
He was a resistant when he was 17 and was in the concentration camp Buchenwald during the last WWar2
This man is now 83 years old, and I like to know he is still alive and sometimes I can see him in the television and perhaps one day meet him at an event

hee hee Tryphina! Let's take it to the streets!!! Mass Action, mass action!!
I live in a hectic society
I am fingered for my actions
In me the spirit of difiance never diminish
Resistance is defense
Defense in Action, in Action

Ajar, and agape are my lips
against upleasant policies of this world,
When justice is conceived somewhere
Elsewhere Democracy never was!
Resistance is Defense!
Defense in Action, in Action (Mzwakhe Mbulu)

Brilliant post Stephen, see what Tryphina did, now I am getting all nostalgic and stuff!! You are a great Narrator all the same.

Try-
Your comment stands alone as just something that should be read and taken seriously. Thanks. :)

Cergie-
Yes, it is always fantastic to meet someone who I admire. I haven't been disapointed yet in one of those meetings. Sad, most of the people I would like to meet are dead (Richard Wright-writer, John Donne, Malcolm X, Billie Holliday, Marvin Gaye, etc...just to name a few). :)

Mojo-
Thank you, but you and Tryphina need to talk. :)

Stephen..Sonia is my friend. I have picked her up and hung out with her for 2 days both times she has been here. I even wrote an article about her for my local African-American paper. She's tiny isn't she? But her words carry serious weight!
Does your house have lions is mainly about her dad. I wish I had known and I could hooked you up :)

OMG, I'm so jealous!! I love her!! I wish I could have been there. That would have been so awesome! Glad you had fun. I'm about to check out your photos now.

by the way....you must have a great camera.

UB-
Sonia Sanchez is a wonderful living treasure! I love her too. I'll have to give you heads up on the next event.

sometimes when i read your posts about social activists..i wonder why back home in singapore..we are so lacking in this area..real men and women fighting for our rights to speak the truth...to break the chain of complacency, indifference...etc

Blkfeline-
You know, I think that we are lacking here in the US as well. They are a dying breed. Thanks!