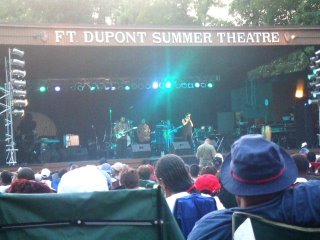 Washington, D.C. has many attractions that are east of the river. Wait. I should clarify by saying that this is east of the Anacostia River. Specifically, east of the river in DC means the gentrified remains of George Clinton’s version of “Chocolate City” (i.e. The Hood). Some of you may not realize that DC had/has a thriving Black community that has been here since the turn of the 20th Century. My family has been here for about four generations. The city is changing now that some poor blacks are being forced to leave because of new developments (condos, cafes, etc.) and others are choosing to leave for more yard space in the suburbs. Besides, we do love our BBQ’s and family gatherings. Then, there is Fort Dupont Park, The rock on the ridge located in the heart of Southeast Washington. For the past 30 years, Fort Dupont has been a place where family, friends and lovers can go to listen to the best in Jazz, Blues, Soul, and R&B. The best thing about it is that it’s FREE!!!! Yes, FREE and sponsored by the National Park Service. We had a nice spot not too far from the stage. I was accompanied by my wife, aunt, uncle, and extended South African Family. We had plenty of fruit, chips, water, and juice between us. We had a great time and the weather was nice once that hot azz sun began to set.


Highlight: The best musical moment of the show (besides my wife shouting “Yes!” to one of the performers on stage) was the performance by DC’s own William DeVaughn. You should have seen him! He was dressed to the T with a sky (hat) to match. He looked like a straight up “Mack.” He sang his now ghetto anthem, “Be Thankful.”

You know the words, “…Diamond in the back sun roof top…digging the scene with gangsta lean Hooo Hoooooo oooh!!!”

The entire crowd was singing along and dancing. I love Fort Dupont Park! It’s one of the few remnants of the DC that I remember growing up in old DC (A.K.A Chocolate City).

This is the remaining line up for Summer 2006:

Sounds like my kind of fun and relaxation! I've never been to Fort Dupont Park. Never even heard of it until now. I guess thats because I'm relatively new to the DC area (been here 2 years now). I fell in love with DC when I first started visiting back in 02'. There are alot of venues with live jazz bands that play outside. Just have to search for them. I've been to the live jazz performance that they have at the cap center in Largo on Wednesday evenings. That's pretty nice!

ubfly-
It has become a DC tradition for those that grew up in the area surrounding the park. If you get a chance to attend it is best to go about an hour before the show. It's a nice time and there's never any trouble. Where did you move from?

man it sounds like y'all had a groovy time. so many good memories from that park. photos were great. looks like the crew got down to some chocolate city good music. enjoy the day. ananda

Sounds like you had a ball. I wish I lived on the coast -- Free concerts like this? WOW...not gonna see that in KC. Love Midnight Star and Regina Bell ... wish I could check out their concerts.

michelle-
Haa haaa! I'll keep up the posting for your sake. :) I had a nice time.

that's one of the things i miss about living in NYC. in the summer time there are so many free events, concerts (Summer Stage/Celebrate Brooklyn/Harlem Week), etc. LA is definitely lacking some....culture. i guess it's because we are a commuter culture & so spread out. there is no "center" of our city, just a bunch of wild branches doing their own thing.

any events you plan on doing this weekend? I may be there Friday Nite.

pwife-
Yeah, you know the NYC is always going to have something happening. I've never been to LA. I'd like to visit one day.

bougie-
I need to check. I ususally don't know what I'm going to do until I check with Mrs. Bess. Sometimes I'll make plans and then she'll say, "Don't you remember that we have to..." :)
I'll get back.

Great scenery Stephen, I can sense the festive atmosphere :) My lover introduced me to Fort Dupont :) Tis the one place I feel at home. It's a good feeling to have that many black folk in one place at the same time having a good o'l time :) If I am dreaming please don't wake me up!! If I am wrong I don't wanna be right!! Yes, I said it!!

Thank you for sharing you talent with us :)

Wow, you really make me wish I was there. Two of my closest friends live in or near DC.

ubfly-
I'm from Williamston, NC. Have you heard of it?

Xavier-
Yes, it's a good time on a comfortable Sat night. I love classic soul music so I'm in soul heaven.

Sounds like the type of fun that I should try to get more of. It's not always that easy to attend events like this here in London.

nml-
Yes, I love this time of year despite the humidity and heat. It's alright when sunsets though. I'm sure that I'll have another post on this before Summers end. Thanks