This Is No Ordinary Man: Paul Rusesabagina 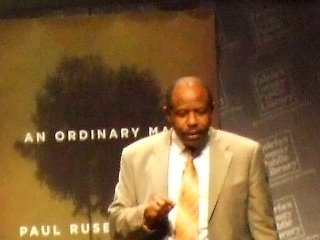 Last evening, I had the pleasure of seeing Paul Rusesabagina speak at George Mason University's Center for the Arts. Rusesabagina played a major role in saving over 1200 Rwandan refugees during the slaughter of what would become millions throughout the country. Rusesabagina’s bravery and dedication to saving the lives of his people inspired the 2004 award winning film, Hotel Rwanda, starring Don Cheadle as Paul Rusesabagina. In this informative lecture, Rusesabagina gave a detailed account of what happened at the Hotel des Mille Collines in April of 1994 and the effects that it had on him as an individual. He spoke of the atrocities of genocide inflicted upon the Tutsis by the Hutu. He also spoke of the United Nations role in allowing these atrocities to happen and how the West chose to walk away from the situation.
He went on to say that they could have, at least, silenced the radios in and around Rwanda that were spewing hate messages and fueling the already intense animosity the Hutus had for the Tutsi. Did this experience change him as a person? Rusesabagina said that it is now very difficult for him to trust after what happened in Rwanda. The people who he thought he could trust left him and his family to die at the hands of rebels who wanted to wipe out an entire race of Tutsi or “cockroaches” as they were called. He mentioned that it takes him a while to trust when dealing with people on an individual basis.

Overall, it was a great experience to see and hear Paul Rusesabagina speak. He urged everyone (especially the next generation) to do all we can to make sure that the genocide anywhere never happens again. Unfortunately, I looked around the audience and saw many of that generation sleeping through the lecture. Meanwhile, “History continues to repeat itself over and over again,” he said. He urged us to speak out, write to our congress, petition, send money or do anything to make our voices heard. Paul signed copies of his book, "An Ordinary Man: The Story of Hotel Rwanda.” I picked up a copy to be signed and finally made it to the front of the line. I asked my wife do the honors. In the end, I didn’t get a chance to shake Paul Rusesabagina’s hand amidst all of the madness and rush, but I did manage to smile at him while he was signing a book for us and he smiled back. God bless you Mr. Rusesabagina. 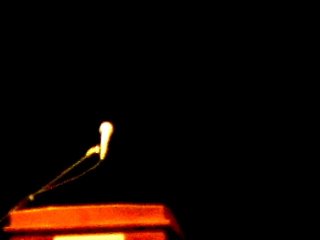 He also brought attention to the genocide that is taking place n Darfur where the Sudanese Government is using Arab “Janjaweed” militias (air force) to murder several hundred thousand black Sudanese through organized starvation. His question to us was, who will speak for them? Who will speak for them?
at 4/11/2006 11:12:00 AM

a question we all must ask ourselves. sounds like a very informative & fun evening! thank you for sharing.

"Hotel Rwanda" was a great movie, so was "Sometime in April" (the HBO film dealing w/ the genocide in Rwanda).

Prisoner's Wife-
It really was very informative. I really enjoyed it. He is a remarkable and humble man. I'll have to see "Sometime In April." I didn't see that when it was on HBO. Thanks as always.

It sounds like a very interesting and deep lecture. I bet it was very touching to hear, about this tragedy straight from his mouth. I will sometime have to check out both of those movies. (I unfortunately do not see many movies at all)Thank you again for sharing another interesting part of your life!

Hello Faith! You're welcome. I hope that all is well and that your part of the country is warmer. :)
Yes, it was all that you said. He is an extra-ordinary man. Take care

Hotel Rwanda leaves you with a desire to know more about a man with the kind of moral fiber, integrity, and "testicular fortitude" that Paul Rusesabagina possesses.

What a wonderful opportunity you had!

I watched a documentary, several months ago, that followed Paul and his wife back to the killing fields of Rwanda. It was their first trip back since they survived the genocide. It was so very moving and impacted me greatly.

I cannot recall the title of the film but you can certainly Google it. Try to catch it sometime.

Pamela-
"testicular fortitude" Haa haa! :) You're funny and I agree. it was a pleasure being in his company.
Yes, the DVD has a similar documentary. I've heard of the one that you're talking about. It would be interesting to see. I'll check it out.

Stephen..."sometimes with april" stars Idris Elba (aka Stringer Bell). it takes a look at the genocide from a family's perspective & how devisive it was for families who were from both tribes. it's very interesting (and sad). it was so moving. i saw it before i saw Hotel Rwanda & i was astounded it.

Yes, he was the man on "The Wire." Great actor! I wonder if they have that on DVD? I'll have to check.

Thanks for asking Stephen, all is great here in MN. It is FINALLY spring! We actually have been quite above average the past few days like upper 70's! :) And the sun. Oh the sun. I love the sun!!!
I hope all is good with you in DC as well.

Faith-
The weather is really nice in DC. We are between 65 and 72 for the most.

Stunuh-
You are such the poet. Your words say it all. Thanks!

wow what an honor to hear someone like that speak.
these things have been on my mind latley too....

I bet that was an amazing lecture. It's hard to imagine that the kind of brutality he witnessed first hand is happening in our lifetimes while the US -- the worlds' supposed protectors do nothing about! I'm going to have to check out Mr. Rusesabagina's book. I know Hotel Rwanda was an amazing movie, but I bet it's nothing compared to reading his book in his own words. Do you know if he's doing a book tour? I wonder if he's coming to KC anytime soon. Thanks for sharing. Be blessed.

I always get an insightful, educated read on this blog. Very touching.

Michelle-
I'm not sure if he's doing a book tour? I'm excited about reading his book too. I need to finish the one I'm on first. :)