Saturday Night At The Lincoln Theater: A Washington Treasure 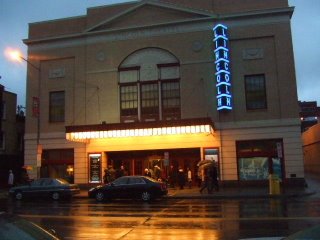 On Saturday I had the pleasure of attending a program at the Lincoln Theater. The Hung Tao Choy Mei Leadership Institute under the directorship of Abdur-Rahim Muhammad put together this wonderful event that was hosted by award winning WUSA 9 News anchor, Tracey Neale. The program was appropriately called, An Unforgettable Evening With Dick Gregory. The father, comedian, author, and civil rights/social activist, Dick Gregory was presented with the Here I Stand award in honor of Paul Robeson. This award is presented annually to an individual who has “committed his or her life to excellence in their chosen field and has demonstrated and equal commitment to activism for progressive causes.” This was my first time attending any event at the Lincoln Theater. I was very impressed with the atmosphere that has been restored to its early 20th Century grandeur. I heard some people in the back of me compare it to the Apollo Theater in Harlem. I’m not sure because I’ve never been to the Apollo in all my visits to New York? The Lincoln Theater is definitely a Washington gem. 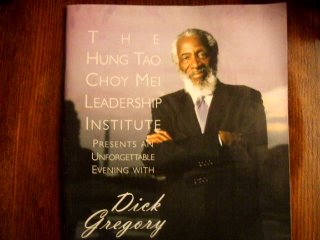 Dr. Manning Marable, Columbia University professor of Public Affairs, Political Science, History and African American Studies was the interviewer. Dr. Marable engaged Dick Gregory in questions that took the audience from his childhood home in St. Louis, MO through his activities as a comedian and soldier for social change. Dick Gregory was in rare form as always while the audience clung to his every word. I was in complete awe of this man who was a complete inspiration, living legend and historian. He spoke of his life and the now famous people that he’s met and joined in the struggle with along the way. This list included Malcolm X, Rev. Dr. Martin Luther King, Jr., and Mandela just to name a few. He also spoke of the genius of fellow comedians Lenny Bruce and Richard Pryor. He felt that few could reach that type of genius in comedy today, but that Washington D.C.’s own Dave Chappelle was gaining ground. The show lasted for 5 hours and included a recital honoring Paul Robeson with DMA Concert Pianist, Dr. Raymond Jackson and Opera singer, Kevin Maynor.

Another treat for that most unforgettable evening was my encounter with poet and social activist, Amiri Baraka. I had a chance to go to the “meet and greet” before the show and Mr. 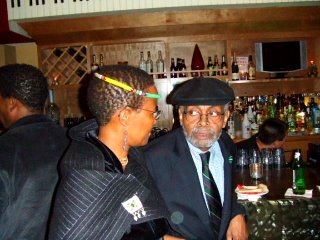 Baraka was standing at the bar with his lovely wife, Amina Baraka. My wife and I approached them and engaged in a little conversation about the upcoming show and a little about politics. (The side picture shows Mr. Baraka and Sis Nomvuyo from South Africa). Afterwards, I shook his hand and expressed my pleasure in meeting him. I found it amusing that he responded with, "ok, I’ll see you around man." He’s a bad brotha! He was also part of the show and performed two riveting poems, which included a tribute to Paul Robeson titled, Revolutionary Legacy, Revolutionary Tradition. I wanted to shout, but I chilled because the crowd was somewhat subdued. It was a long show that started at 7:30 pm and ended close to midnight. I went home happy and enlightend, but tired.
at 4/24/2006 12:33:00 PM

Wow, what an honor to meet such a man. Sounds like a wonderful evening! Glad you had fun!

It was a great honor. I didn't get to talk with Dick Gregory, but I did get a chance to greet him with a handshake. :)
Are you finished studying?

Well, mostly. Got a lot done this weekend. I only have one final, and it is Wed night, so I am pretty set for it. Thanks for remembering! :)

Hi Stephen, I resign from being your groupie!! I want to be the great Dick Gregory's groupie. You think I might get a chance to shake his hand??

Tryphina-
Haa haa! :)
Ah come on! You can shake more than that. lol

I'm a fan of most of Mr Baraka's writing. "Monday in B-flat" is one of my favourites.

I can pray
all day
& God
wont come.

COOL DUDE!
WOW... ok, rubbing shoulders! put it on the ritz! what can I say, awesome!

I would have LOVED to attend that event...I admire the accomplishments of Paul Robeson, and it's even great that you got to be in the presence of Mr. Baraka...beautiful

rethabile-
I like that poem! I could sense his grassroots roots appeal just in the 10 minutes that I spoke to him. Remarkable man. Thanks!

stunuh-
Yes, it was really awsome to converse with living legends!

profgq-
The funny thing is that I had an extra ticket and I was calling all over the place to see who could come. I wasn't able to get in contact with anyone.

look at you! so culturally informed. y'all always do the cool ish! :)

I love the fact that you're not afraid to approach anyone. Oh and I think you're the most cultured person I know!

i absolutely LOVE baraka. . . never saw him do a reading, but he's amazing.

Yeah so, I think it is about time I get a tour of D.C. You are always doing something cool there!

prisoner's wife-
I love that picture that you have for your comment. Thanks, I had a nice evening Saturday.

nml-
I always check out the person before I approach. I give it about 5 to 10 mins unless there's no time. It's almost cat like. :)If they seem cool then I go in. Thanks for the compliment.

bougie-
Baraka is an electrifying speaker! You would enjoy him.

brea-
Yes, I think it's time. Check in on me and I'll have the scoop on different neighborhoods like Tony Perkins. :)

Mr. Bess: thanks! the picture is Madlib's album cover for the album "Stevie". i dig that type of art.

Gotta love that! :) My family still calls me "Stevie" from when I was a child. Thank God for Stevie Wonder who is old enough to be my father. Otherwise, Stevie would sound silly at my age. :)

Stephen, I have seen Dick Gregory here in St. Louis a few years ago and Amina Baraka back at my days at Noropa in Boulder, CO. where he taught a workshop. Both are great men and I dont use that word lightly.

It's time for me to visit again. Usually I am there three times a year but I haven't been there in two years...for me that is very not like me at all...

david-
I agree. They are great, yet, humble men.

rose-
Yes, you should. I think that my brother is coming to visit this weekend. I look forward to entertaining him while he's in town.

We're very happy that you enjoyed the event and also had a chance to meet Brother Baraka. Brother Dick Gregory with all his many accomplishments sincerely loves sharing his gifts as part of community functions and events like ours. We hope that you will attend our Hung Tao Choy Mei "Here I Stand" award event in honor of Paul Robeson again next year at the Historic Lincoln Theater. Remeber, before there was Harlem there was U Street.

Mr. Muhammad-
Hello! Thanks for stopping by. Yes, I still have the program from that event. I enjoyed it a great deal! I look forward to attending it again this Spring. Thanks again for stopping by. It was an unexpected surprise. Peace, brother.