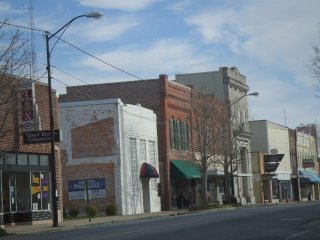 I remember getting fountain cherry cokes from Clark's Pharmacy on Saturday mornings on Main Street in Williamston. I think you can still get them there (cherry or vanilla). It was what we did on Saturday mornings in that sleepy town nestled on the Roanoke river. Williamston, North Carolina was a perfectly quiet and segregated town when I was a teenager in the early 1980's. The Jim Crow signs were down by then, but the sentiment still lingered. There were still at least two segregated lunch counters and other places that were "understood" as off limits. The town has changed some since then. The lunch counters and other establishments are now all fully integrated.
Is it safe now? Well, It is no longer the safe haven from the city that my parents knew when they sent me there at the age of 12. It's still safer than a larger city, but it has lost its "innocence." Dope and cocaine can now be found within it's crevices and street corners. As a matter of fact, there are parts of town that have become so urban that they have changed the name of the street. For instance, Sycamore Street has now become Martin Luther King, Jr. Drive. Unfortunately, that's usually a clear indication that the Ghetto has arrived.

and we just met

elaborations are in order....

your definition of ghetto?

Hello Mwabi! My definition of Ghetto???
It is a financially and/or socially depressed area of a city/town that is usually located on the lower west end or south side.
The Ghetto mentality is one that is plagued with the inability to see past ones own existence or status in life.

i currently reside in trenton, nj. and we have the same problem here... it is tragic... and the sad thing about it is that the drugs, sex, and violence takes place on the very streets that are named after the great men and women who fought so hard for the advances that our people enjoy today....

Mr. Harris,
I completely agree. I wonder if the "powers that be" are trying to send a msg?
Thanks for stopping by.

I axed cause as you know the word is being thrown around real lightly these days - white folk refer to things as ghetto that are not up to par like a pair of shoes for instance.

A comedian made a joke about that - if you looking for crime in amy city ask where MLK Blvd is.

Mwabi-
Hello. I was out to lunch. :)
Yes, the word "Ghetto" has been thrown around quite a bit. As you mentioned, it's usually referring to something that is dirty, crime infested, poor quality, or just something that is gaudy. Although, historically it was in reference to Jewish or Italian neighborhoods it has, without a doubt, become just a Black condition. This is especially true when in reference to the poor.

Is it any city? I'm hoping that there is a city or town somewhere that has a MLK blvd that is not in a poor depressed area. If anyone knows of one please share.

and the name of the school

I sure hope you are right Stephen, and there is some MLK streets that are not it the poor or bad parts of town. He was a great man, who did wonderful things for this country, and that would just be sad. I cannot think of any MLK street here in the Twin Cities, of Minneapolis and St Paul MN. (I am sure there is one, I just do not know where it is.)So take care and lets all remember to take time to remember Martin Luther King Jr. and all the things he did. Especially with his Birthday on Sunday.

Yes Faith! Thank you for that msg that he would definitely want us to remember. Have a great weekend!

Going on with what Mwabi/Faith said, Most of the MLK Schools, or BLVD's, are the worst ones in the country. To be honest, I'm scared, myself to go to half of these!
But to disagree, it's not the "white folks", Mwabi that throw the word "Ghetto" around so casually. It's black folks too.

THANKS BESS for this write-up. AND more importantly thank-you for the reference to the Jewish community and the word "Ghetto". Many people don't necessarily relate the two.

Thanks for writing about this. It's good to remember. There is 'ghetto' in Englad but it nothing compared to what is in America. I knew exactly what type of ghetto you meant!

Stephen, I am not a poet or anything, but I can feel the emotion in your write-up. I am in there witchu' bro

I am sure you know this is in-built in the system!!

nml-
I'm happy that you are feeling that. I've been thinking about this post a bit and I am beginning to feel the sentiments of the song..."The World Is A Ghetto."

Tryphina-
You're an amazing poet!

SEJ-
Yes, we are all throwing that word around casually. I've heard White, Black, Asian, and Latinos using it in reference to anything tacky or negative.

Imagine someone saying that at the turn of the 20th Century: "Those Italians over in Little Italy are so Ghetto!" Haa haa! :)

Our MLK is ghetto too. Well...you already know that. In Iowa they have a MLK too....it's in the ghetto too.